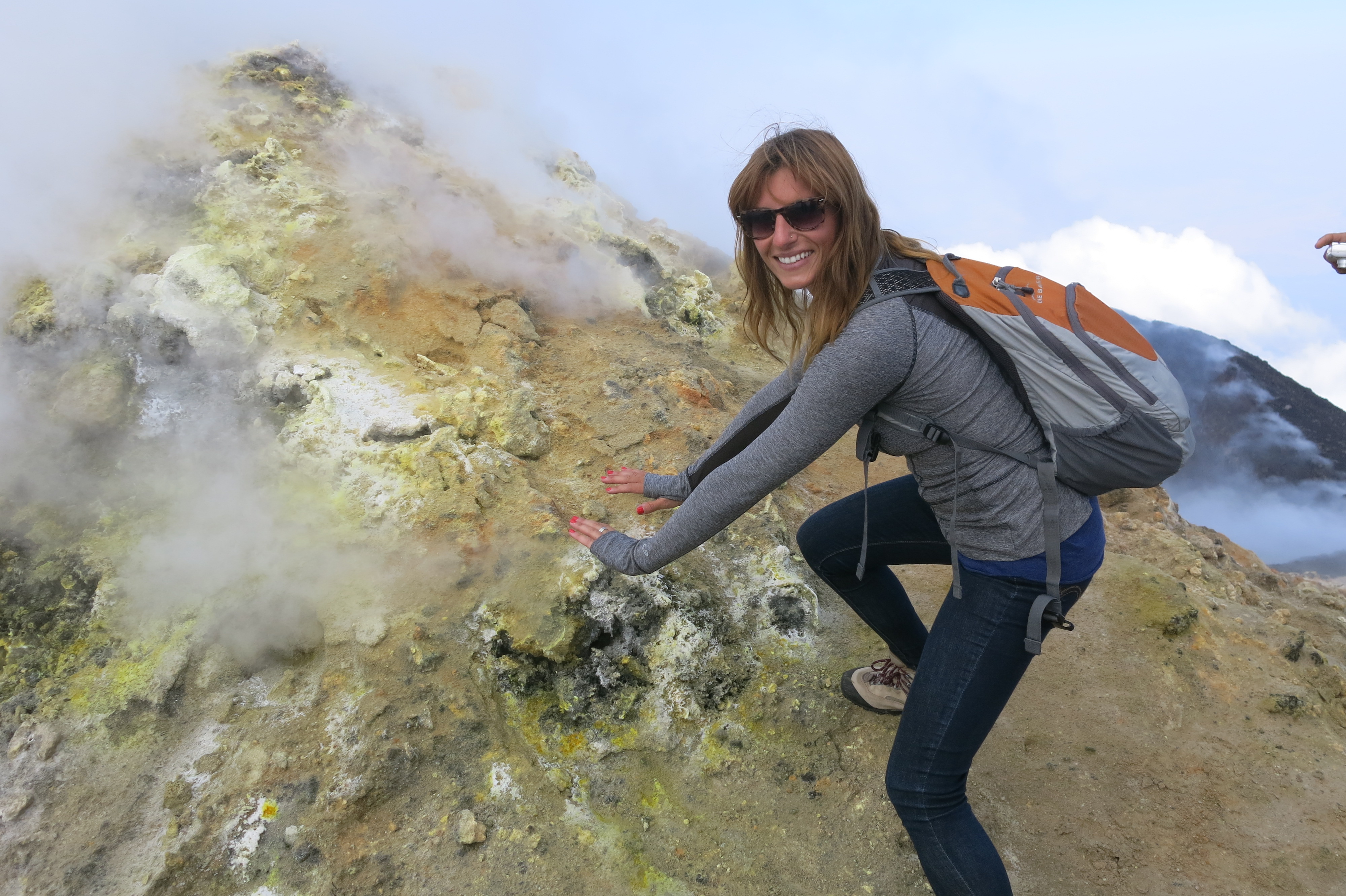 A few days ago I opened my e-mail and there was a message from Giovanni Raiti, one of the winemakers at Vino Quantico in Sicily. He sent a photo of the volcano, Mt. Etna, in a beautiful eruption and said “I think it wanted to celebrate the arrival of our wine in NY! To think, we were just walking up there a couple of months ago!” 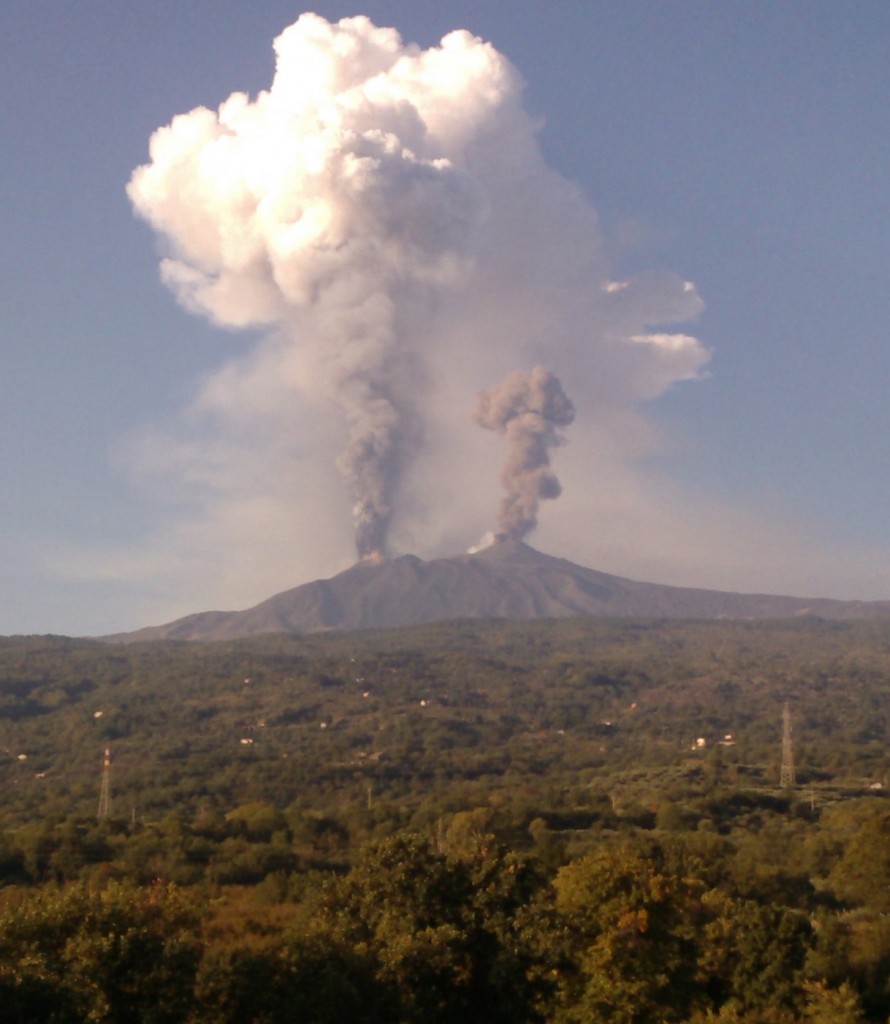 It is definitely pretty wild to think in August we were hiking at the top of this volcano and just a few days ago it was spitting lava on those same trails. Between the eruption and the arrival of the Quantico wines in New York, I thought it was time to pick up where I left off on my Sicily adventures and fill you in on these exciting new wines to the Jenny & Francois family.

Situated in Linguaglossa on the North side of the famous active volcano, Mt. Etna, I found myself in another special  and truly fascinating place – Vino Quantico. I can’t say I had ever been in a vineyard that has actual volcanic rock from an eruption a few years ago that came so close to Linguaglossa it left ash on their car windshields and black rocks scattered throughout the vineyard. 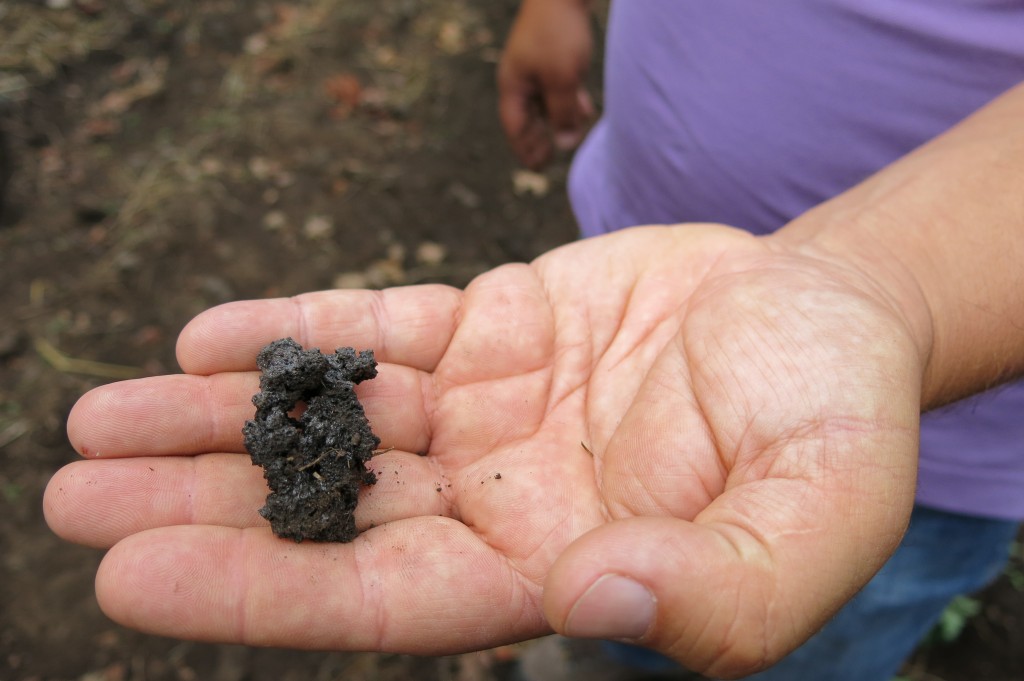 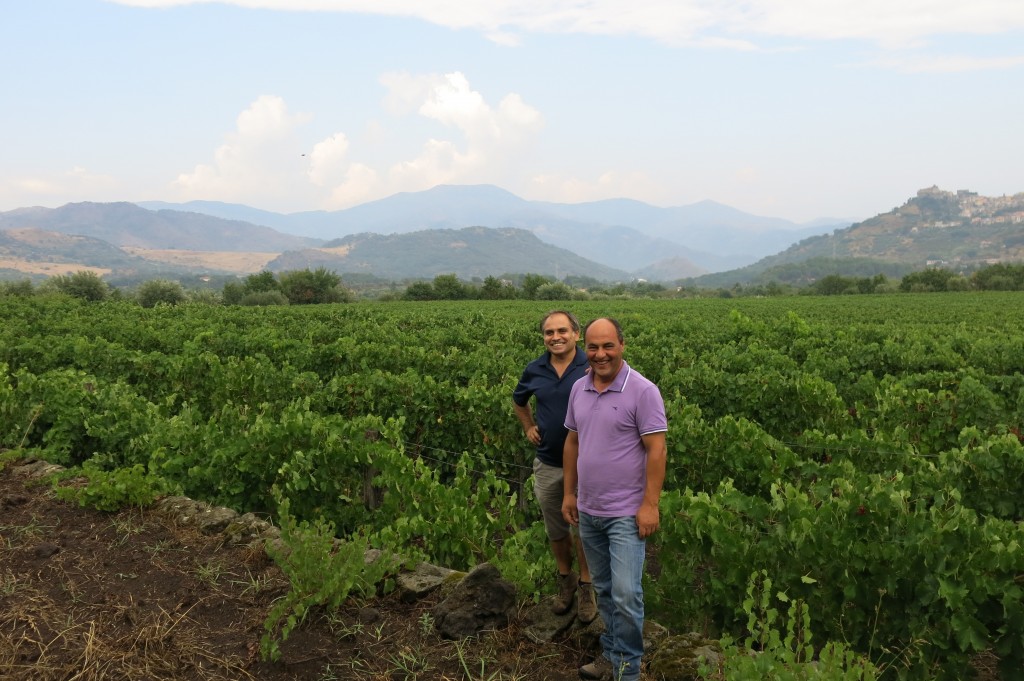 We started our day early with a half a day hike up to the top of Mt. Etna and as we neared the top we could actually hear rumbling and spitting from one of the four craters. 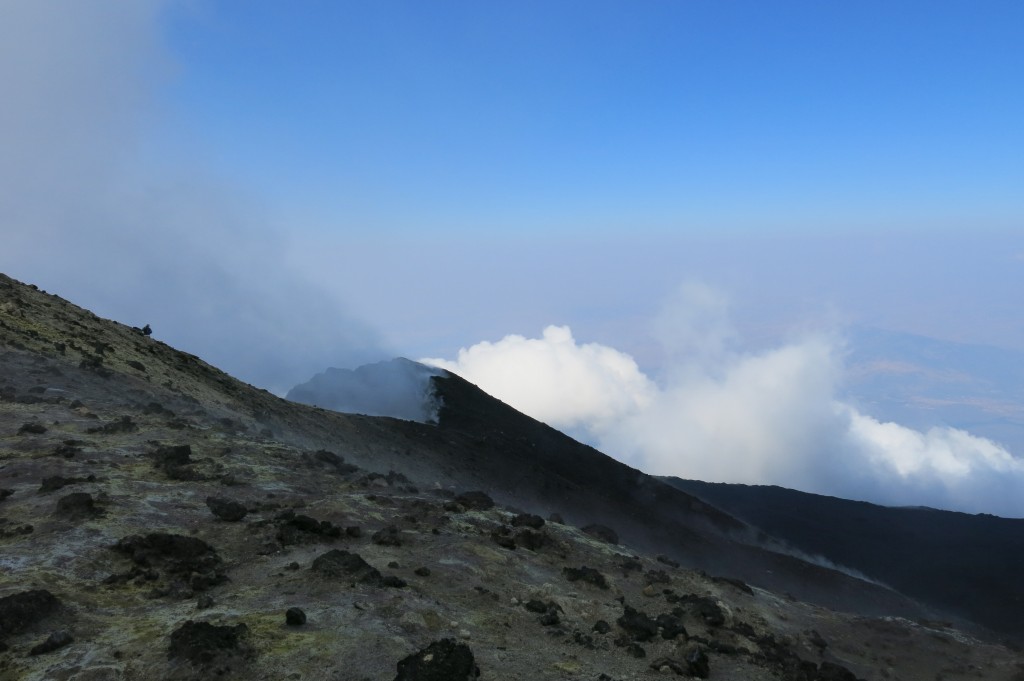 I kicked my boots over the yellow powdery ground which I later learned is sulfur coming from the crater. It was so strong and stinky it took our breath away and we had to walk with napkins shielding our faces like a filter (don’t worry, they aren’t putting any in the wine!) 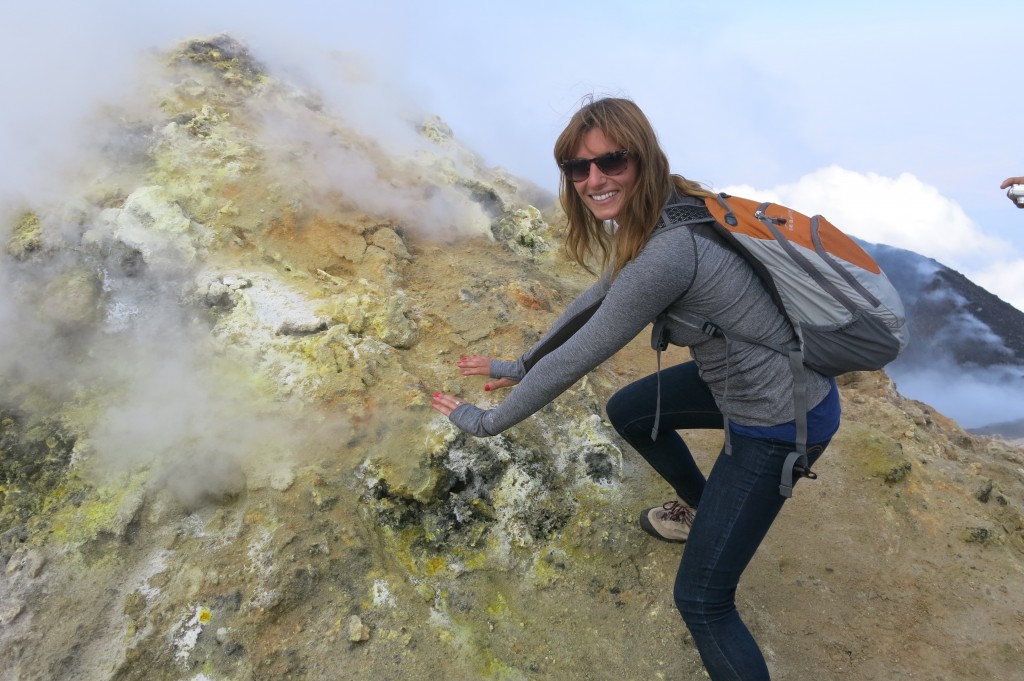 It felt like we were walking on the moon at the top of Etna and I was surprised to see thousands of lady bugs all over – hiding in tiny crevices of burnt rock, flying into me while I was hiking into the wind. It was strange and enchanting at the same time. 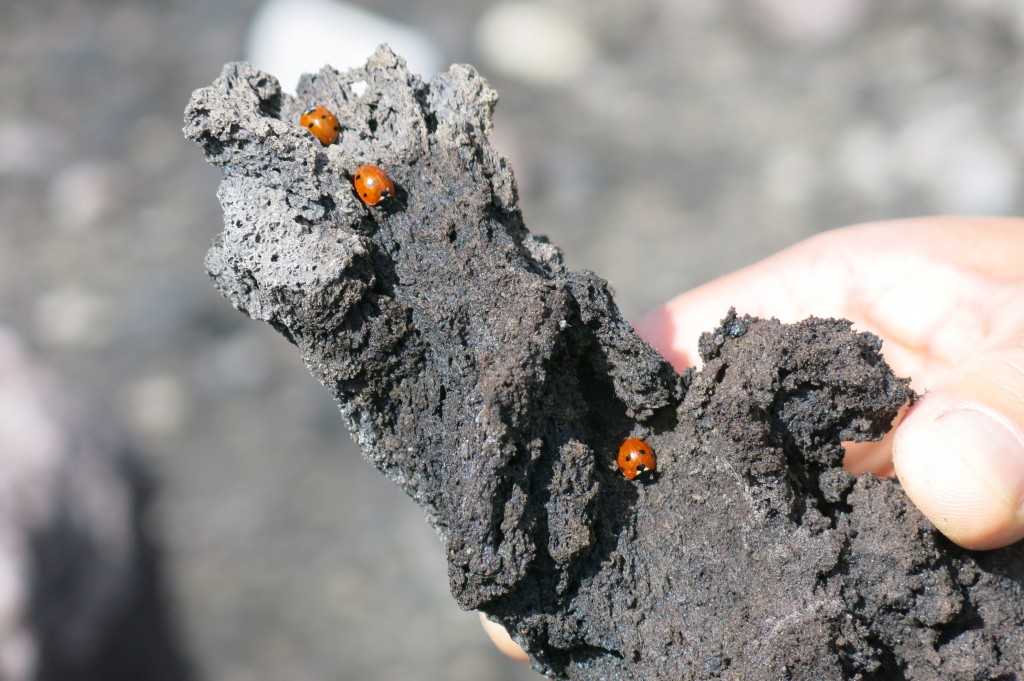 Halfway down we took a lunch break and Giovanni to my surprise took off his backpack, unpacked prosciutto sandwiches, wine glasses (not plastic!) and two bottles of his white wine, made from Carricante, Catarratto and Grillo.  The wine is fermented on the skins for 24 hours; it’s a medium to full bodied white with great complexity, citrus and spicy herb notes finishing with perfect acidity. I  remember the most extraordinary feeling of drinking this gorgeous wine and sitting on the side of the volcano that made the very soil that produced it. The soil of Etna is extremely fertile and produces wines with great acidity and long aging potential. 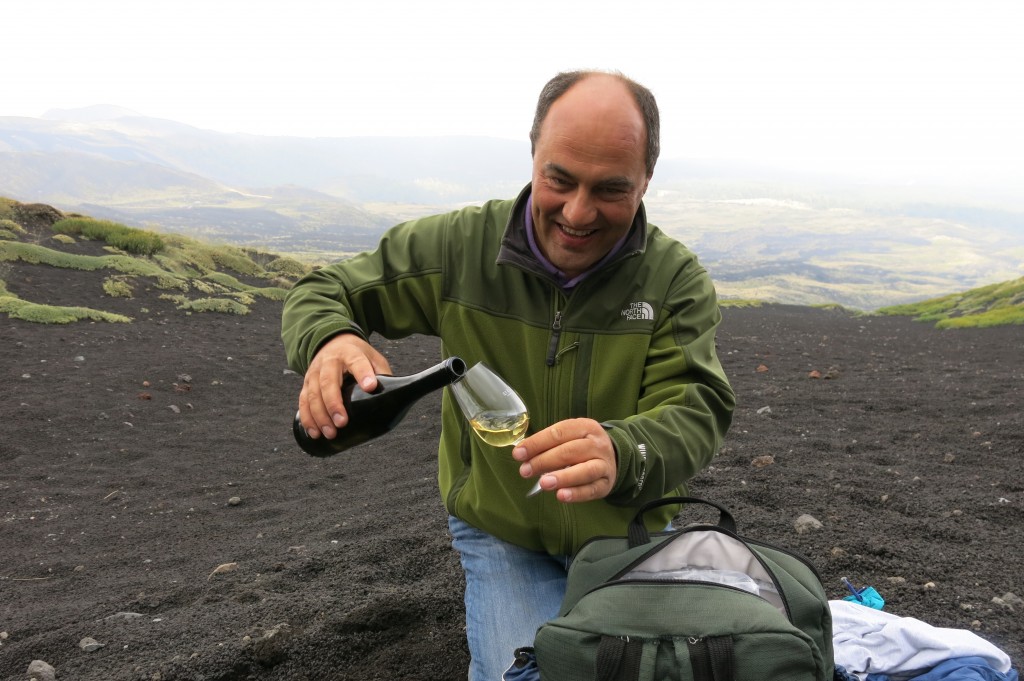 After the hike we drove to the vineyards; there are 3 – one for the white grapes, one for the red grapes, and a separate older vineyard that belonged to Giovanni’s father where they still harvest 20% of their grapes. The vineyards have been organic since 2007 and they are growing 5 varieties, Narello Mascalese which is the primary red grape, Narello Capuccio which is blended mostly for color with it’s a dark black/blue skin and the three white grapes mentioned above, Carricante, Catarratto and Grillo. 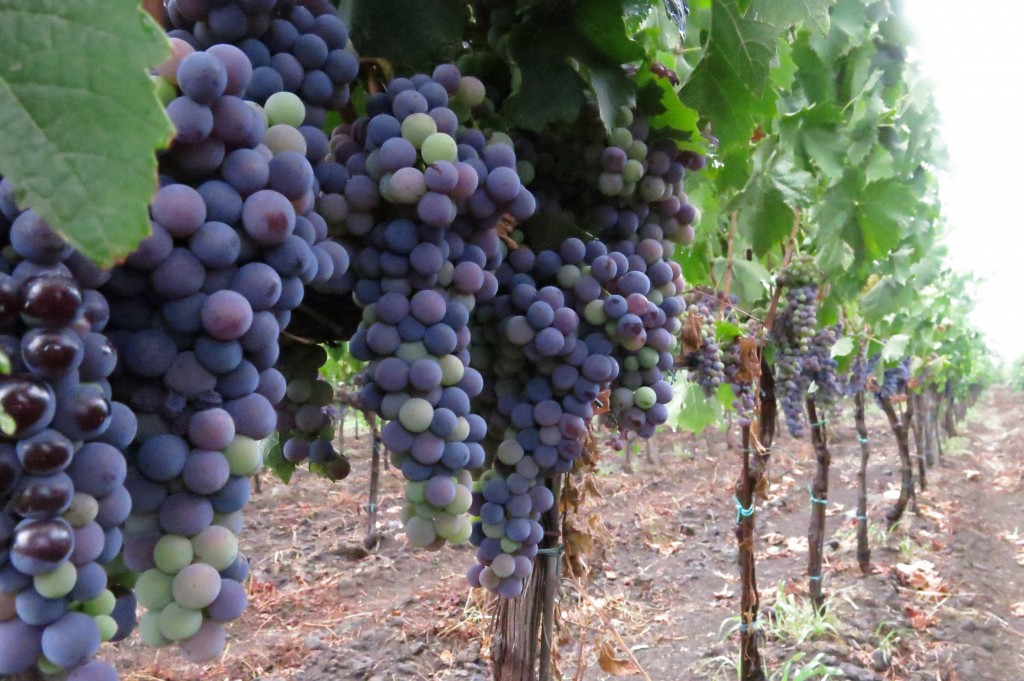 The white vineyard looks up at an ancient Greek/Roman town, Castiglione di Sicilia which takes its name from Castel Leone, or remote fortress. The ruins still stand and you can see the castle in the distance from the vineyard. 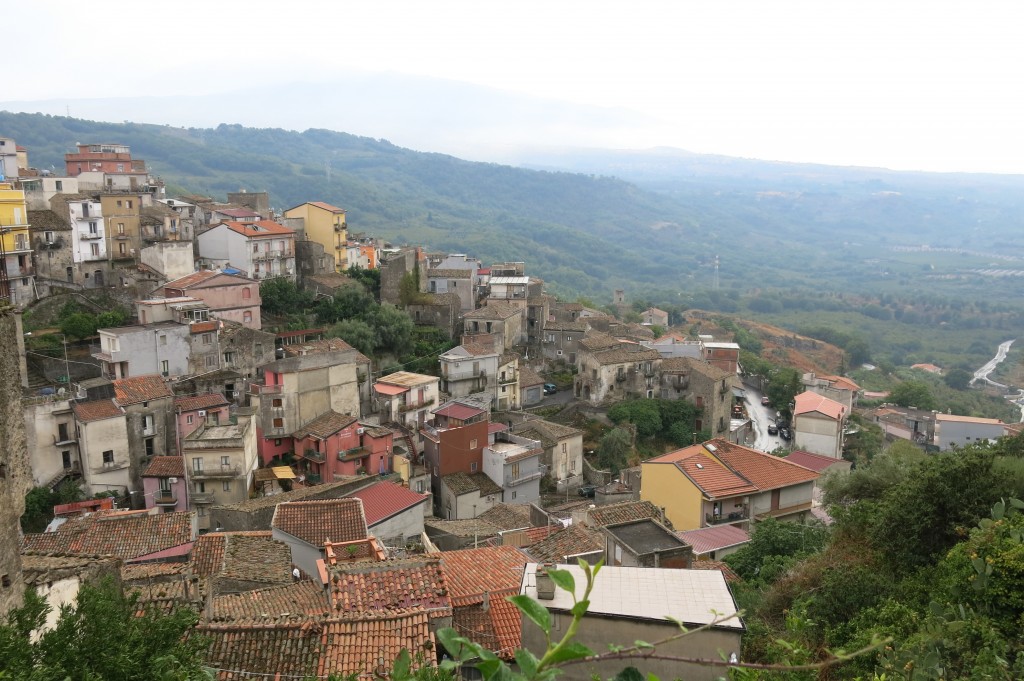 Besides making delicious wine, Giovanni and Pietro were two of the nicest people I’ve ever met and were truly gracious hosts. We finished the evening at a restaurant in Randazzo that specialized in mushroom dishes and finished the rest of the wine they brought alongside some of the most incredible mushrooms I’ve ever tasted. Their red wine was the perfect companion, a blend of 90% Nerello Mascalese and 10% Nerello Cappuccio and aging 12 months in a mix of new and old barriques, the wine is spicy and aromatic with a beautiful balance of acidity, bright red fruit and soft tannins. You would never guess it comes from such a warm climate. Pietro even brought a bottle of Passito, a sweet wine made from dried grapes from the first vintage he ever made and we clinked glasses. An old wine shared among new friends and the perfect ending to a day filled with history, terroir, new found knowledge and just enough indulgence…

Stay tuned for tales from my other two vineyard visits.. coming soon!