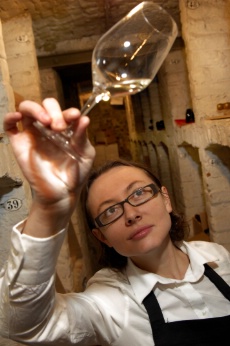 This is an interview conducted with Pascaline Lepeletier, the sommelier at Rouge Tomate. The original Rouge Tomate was opened in Brussels in 2001, and the New York version opened in 2008. The philosophy of the restaurant is S.P.E.(Sanitas Per Escam, health through food), and the menu features a staggering array of local, seasonal, healthful, and delicious food. Pascaline has crafted a wine list that’s every bit as natural as the food, and as someone who educates about natural wines to a lot of customers, I wanted to sit down and chat with her about how she does it. This is part 2 of the interview, part 1 was featured last week.
Is your wine list all organic?

No, it’s not. It’s going towards that way, but I still believe you have great wine that is made in a very conventional way, with very rustic expressions of the soil they came from. And by the way, if you want to have a wine that tastes of soil, you can definitely find that in organic and biodynamic wines. There’s a vibrancy, a minerality that you find much more there. But I am in a restaurant and I have to think first and foremost about the customer, so I do have a couple of wines that I don’t believe in 100 percent.  It’s important for me to have those to open the door for the client, so they can try those wines and then maybe move on to something else. It’s much more important to be able to start a dialogue.

So how do you do that? How do start that dialogue and choose which wines to recommend to them?

This is the great part of being a sommelier for me, it’s having this dialogue with the guests. You need to understand what the guest wants. Maybe the first time they’re going to say they want a Chardonnay from California. And I don’t have the super famous names from there on the list but I do have some others I can give them that I can tell them are very similar. Hopefully they are going to come back, and they might say, “Oh I liked the wine you suggested last time, do you have something else like that?” And then I might give them something like the Coturri Chardonnay. It’s still from California, but a lot different. And if they don’t like it I tell them, it’s no problem I’ll just take back the bottle. Most of the time people are pleasantly surprised and like it. You can’t force somebody to drink what he doesn’t want to drink, so it’s a question of building trust, which has happened quite a bit, and it’s very cool to see.

So you’re saying that you would not necessarily recommend a natural wine if it’s the first time you’ve seen someone?

Yes, for the most part that’s true. I still think that the palette here in America is very different from the European palette, it’s more used to sweet and salty and slightly spiced flavors, so you need to explain to the person, “you know, these wines are great, but they are not going to be super fruit forward, you are going to have multiple layers of flavor, a touch of bitterness maybe or different kinds of acidity.” And you tell them it’s great, that it’s wonderful with food. And you start to talk, and then they might say they’d like to try this kind of wine.

Do you ever have a case where you feel like the natural wine is the best one to go with a particular dish, so you just recommend that regardless?

Pairings are something that are very personal. Let’s say I have a very nice piece of roasted venison, with a reduction of mushrooms and black truffle, very complex flavors. If I have a choice between a natural wine made with carbonic maceration, and for example, a more conventional but very well-made syrah, I would go first with the best balance, and the wine made from carbonic would probably be too light. Many times it’s a question of which is going to be the best in terms of structure. Of course in the end when you start to narrow down the choices, you realize that the ones with the best structure and balance between acidity and tannins tend to be the natural wines, or the organic or biodynamic wines.

Do you feel like natural wines are easier or harder to pair with foods? Are they more or less versatile?

Yes, I think they are very versatile, as long as there is some backbone and structure. It’s a lot of fun really. I really like bitterness in the wine. For me there are more complimentary flavors to be found there. But also, I don’t feel like you can say on one side you have the good natural and biodynamic wines on one side, and the bad on the other. It’s just a big range of wines. I have had some very very bad biodynamic wines, from the new world, for example. They are biodynamically grown, but then they have used enzymes and sometimes they are so yeasty. I prefer to go with something where maybe the guy used some copper sulfate, and a touch of sulfites at bottling. You just can’t see black and white with these things.

Do you ever have a problem with people returning bottles because they think something is wrong with it?

Not for the most part, but I do have one or two bottles, that are a little bit funky.

Like the Cascina degli Ulivi dolcetto you poured for me the other night?

The dolcetto I have no problems with whatsoever. I sell it like crazy.

So you would recommend that one right off the bat?

Absolutely, no problem. As long as you say that it has a touch of gaminess, like when you talk to the customer you have to be a little careful about the words you choose. If you say there is a touch of reduction on this wine, people will be shocked, but if instead you say there is a touch of gamey leatheriness, and it’s due to the aging, but it’s amazing with food and super drinkable, people will often say, “Oh, I want to try that.” Like for example the L’Anglore Pierre Chaude, I started selling that by the glass. At first I thought, oh my God, what am I doing selling this wine by the glass, and my director thought I was crazy. But I’ve had no problems whatsoever with that wine either. I’m going to be more and more like this as things go along.

So you train your staff to handle all these issues the same way?

Yes, we taste every day. They all have a basic knowledge of biodynamic versus organic, sustainable, etc. And I put that on the side of the wine on the list, whether it’s natural or organic or biodynamic, just so they know they have to tell the guest that the wine is going to be very interesting, very subtle in flavors they are not really used to tasting. And by the way, a couple of those wines are super super funky! But I love them, they are so good with food! And to be honest, if you pour one of these wines for someone that’s not prepared for it, and they don’t like it, it’s not good for the winemaker, for anyone really, because he’s going to feel like natural wine is not good. And that is just not true! So I try to avoid these situations. You need to make a progression with the palate, you can’t just start with the most hardcore. Let’s do one in between first. And then after we can move on to something crazier. Just the other day I had a big table of 10 women, all in their 50’s, and they said “we would like to try some organic wines, but everything we’ve had in the past was not good, they were oxidized and just bad, but is there anything good on your list?” So I poured the Vincent Careme Sparkling Vouvray, and a nice organic prosecco I had for them, and they liked both of them, so they came out of that thinking that yes, organic can be good. It’s like this that it starts to move into more of a personal relationship with the winemaker, for the customer, and for us. It becomes less of a product, and more of a craft.

So what would you say to someone buying wine for a restaurant, who likes these wines personally, but is afraid their customers won’t like them, or doesn’t have the time or resources to train their staff to have as much personal interaction as you do as a sommelier?

Our restaurant is on the Upper East Side, it’s a fancy place, so I have lots of people coming in who want the big famous wines, from California for example. It’s taken a year for me to get the list to where it is now. First I would say though, that’s it’s possible to do this everywhere. Second, I’d say that there is such a huge range of natural, organic and biodynamic wine, so you can totally start with wines that are very well made and balanced, without volatile acidity, oxidation, or reduction. Then after that you can experiment. Like with the Puzelat wine, the Sauvignon Blanc and Menu Pinneau 2009 blend. It was super ripe, and I served it by the glass as a Sauvignon. even though it does not taste like a Sauvignon at all. It’s an amazing wine though, and everyone loved it. As long as you stay away from wines that display VA, oxidation, or reduction, you will have no problems at all.

What do you think about the Upper East Side as a market? Are a lot of your customers from there?

We have a lot of guests from up there, but also tourists, and Europeans and more recently some foodies are coming in, which is nice to see.

There are certainly a lot more natural wines to be found downtown.

You are totally right. But you know, you can’t really judge who’s going to like what. I have some people that live up there, that love Coturri and are super excited to try wines made by him. And then I’ll have some guests that look like they are from downtown, and all they want is some Moet and Chandon. Of course I have to say, sorry, I don’t have that. Every profile is different really.