In the Tasty Parts of California

Vineyards: the grapes are sourced from organic and sustainable vineyards in Northern California

“I was searching for good-quality organic wine in California at a moment when we thought there might be 100% tariffs on all European wine, in January 2020. There was a horrible feeling of “I might lose it all”. I spoke with some huge negociant houses and I just couldn’t move forward. Then I spoke to Chris on the phone. I immediately knew we would do tons of projects together. He is a truly special human being. I’ve never met a winemaker who delves into the extreme details of the techniques of winemaking while talking philosophy. Chris does. It is like meeting a philosophy wizard of the cellar. Plus, he and his family had a “Ridin with Biden” ice-cream cake! How awesome is that?”

“To make things even more personal, the Where’s Linus? label is a collaboration between my husband and my brother.. An abstract map of California… The dream of where to go to find what you are looking for. We all need a dream these days, and when people I love collaborate on moving along that road, it’s pretty great.”

“They say crisis is an opportunity… and that definitely rings true in this case!”

Chris Christensen on the coop with J&F:

“Working with J+F is pretty amazing! I’m a big believer in allowing the grapes to determine their own path, and this partnership is a perfect opportunity to be less of a winemaker and more of a grape-shepherd, guiding the fruit on its journey from grapes to wines… I know it sounds cliché, but it’s totally the vibe – and I think it comes through in every bottle. Furthermore, with the reach and reputation of Jenny & Francois, Where’s Linus? has opened up new avenues for me to expand my advocacy for diversity and inclusion in the wine industry. All in all, working with J+F was pretty much the biggest silver lining for my year 2020.”

Born in Cedar Rapids, Iowa, Chris Christensen never thought winemaking was an actual career path for people who weren’t born into a winery or vineyard until he went on a wine tasting trip to Sonoma during his Junior year at Stanford. Although originally fueled – as Chris himself admits – by the idea that knowing a thing or two about wine might impress girls, Chris’ curiosity about wine quickly turned into a real passion.

And also a real career: although Christensen originally thought he’d just make a couple of harvests for fun before getting a “real” job in banking (which did shortly happen, for about a year), his true calling won out. So here he is, still making wines for both his own brand called Bodkin Wines (named after a battle in the Hundred Years War; Christensen is a huge medieval-history nerd) and companies like ours that are looking for delicious, approachable wine.

As an African American vintner, Chris also works to promote diversity and inclusion in the wine industry through speaking engagements, podcasts, and mentorship opportunities for aspiring vintners and winery owners. His work has earned him much kudos, including a place in the Wine Enthusiast’s 40 Under 40 industry shakers in 2020. Praised for both his activism and self-taught yet skilled winemaking, Christensen is indisputably one of the figures to watch in the American wine industry, and we’re extremely happy that we can do so with a glass of his/our Where’s Linus? juicy wine in hand.

Where’s Linus? Sauvignon Blanc — Back to the top

Grape: Sauvignon Blanc
Personality: Sunshine in a bottle. Take me to the tropical islands and pack some green mango salad & grilled chilli prawns along.
2021:
Vineyard: CSWA certified, sustainably farmed and family-owned Springer Vineyard in the Big Valley District AVA of Lake County, outside of the town of Kelseyville.
Making of: the grapes are pressed and fermented spontaneously by ambient yeast in stainless steel tanks over a two week period, then rested on its own fermentation lees which were kept up in suspension by stirring the tank. (The stirring gives the wine its rich mouthfeel and helped release the glutathione from the lees which acts as a natural preservative and allowed to age and bottle the wine without additional sulfur adds.) Bottled without fining or filtration.
2020
Vineyard: Sandy Bend Vineyard, Alluvial Soils 1,200ft above sea level in Upper Lake, Lake County CA. Planted in 1996, certified Sustainable from 2013. Managed by Chris Schlies, a long-time lawyer and activist and Chris Christensen’s friend.
Making of: The grapes were pressed one day after harvest, with a small addition of SO2. After the slow spontaneous fermentation in tanks, the wine rested in stainless steel and neutral French oak and acacia barrels (about 10%), to give it a bit of an aromatic lift and texture enhancement elements. Bottled in February 2021 without fining and without further sulfur additions (total SO2 12 ppm). 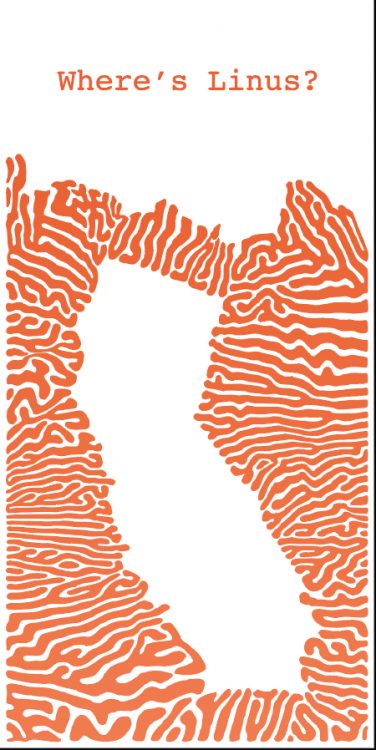 Where’s Linus? Orange — Back to the top

Winemaker’s note on this 2022 novelty: “This wine is its own animal… It’s more of red wine with a ‘pigmentation deficiency’ than it is traditional white grape wine. The vineyard is a great location for growing the notoriously tricky white Rhone varietals, such as our Viognier here. The wind-battered South-Western facing slope gets hot in the day and cold at night allowing the fruit to get ripe but also hold on to its intensity of flavor, which was key when choosing a vineyard we could make a skin-fermentation white wine from.”
Grape: Viognier
Vineyard: Shannon Ridge Vineyard’s Home Ranch at 2000 feet of elevation overlooking the Eastern End of Clear Lake, in the town of Clearlake, Lake County, CA. CCOF certified
Making of: The grapes spontaneously fermented and were pumped over once a day for a 12-day period. Obce pressed, the wine then spent a few months in a stainless steel tank with mixing (batonnage) every 3 weeks to introduce a greater depth of flavor and also smooth out the tannins. No sulfur added, bottled without fining or filtration.
Personality: very much true to Viognier, with its high-terpene-linalool notes. A substantial, aromatic skin-contact wine with smooth, dusty tannins and a unique textural experience. 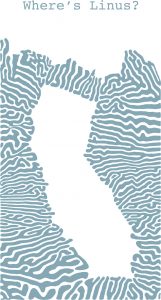 Where’s Linus? Rosé — Back to the top

Making of: harvested and whole cluster pressed, slowly (early September through late December) fermented by ambient yeats in a stainless steel tank and kept on its fermentation lees up until bottling in spring. It saw SO2 only before pressing (total 13ppm), bottled without fining or filtration.

Personality: A bold, complex rosé with subtlety and nuance. The dry-farmed Petite Sirah vines struggled with the drought in 2021 and produced smaller than usual berries with higher skin-to-pulp ratio causing the wine to shown deeper purple hues than one would usually expect from a Rosé. Its seriously deep color is matched with a structure that’s uncommon to the genre which makes this wine a refreshing sipper when chilled, but also is a formidable food wine, not to slink away from pairing with the most stoggy cuisine.

Cellar: The Syrah portion of the wine was hand-picked and pressed to tanks the same day with a small addition of SO2 at the time of pressing. After settling the wine was racked to two egg-shaped tanks for fermentations. The wine fermented with native yeast for 11 days and then rested on its lees. The Petite Sirah was harvested a bit later, direct-pressed, also with a small sulfur addition at pressing. The juice underwent spontaneous fermentation in a stainless steel tank and too was allowed to age on its fermentation lees until mid-October when it was combined with the Syrah. This blend then remained on its lees a tank with no headspace (to minimize the risk of oxidation and allowing the remaining CO2 produced by fermentation to create a protective barrier) until the end of January, when it was racked to tank in preparation for bottling. No fining.

Personality: Fruity, alive, savory, lip-smackingly zesty. Easy-drinking rosé as we like it.

Where’s Linus? Red — Back to the top 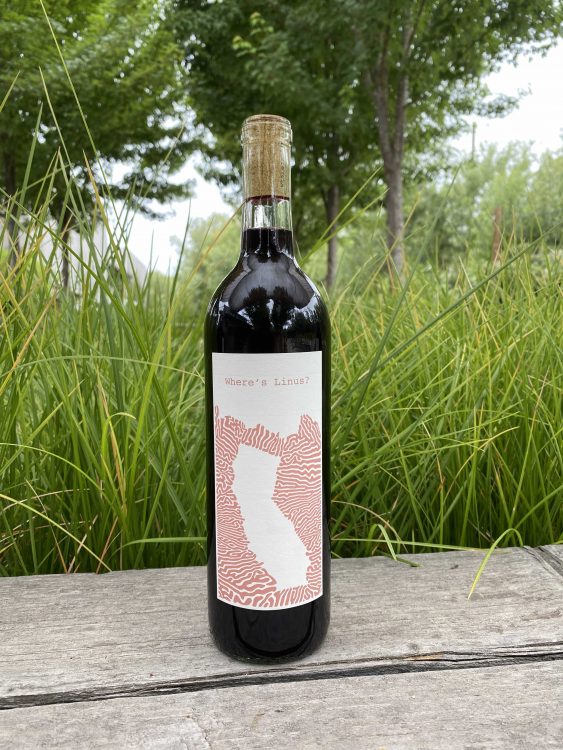 Making of: The Zinfandel portion of the wine was harvested mid-September with the next picks of Petite Sirah added to it a few days later. Both varieties de-stemmed and kept as whole berries. The Zinfandel first began fermentation spontaneously and was well active by the time the Petite Sirah was added to it. The wine was then pressed after a few days and finished fermentation in tanks. No fining, no filter, no sulfur added.

Personality: “With color ranging between Phoenician purple and Vantablack, this wine is darker than dark, due to the high proportion of Petite Sirah. When it comes to the structure, however, it is not the brooding giant that your eyes would lead you to believe. Maximizing the mouthfeel and minimizing the tannins was the name of the game when it came to making this wine. The wine is laced with proper acidity to focus the blueberry jam flavors and give it great aging potential without the need for a sulfur addition…Drink now through 2030-something,” the winemaker says.