Winemaking: manual harvest, spontaneous fermentation only, aging in old foudres or tanks in Christian’s anthroposophic cellar. No fining, no filtration, no sulfur added

“We have a real treasure under our feet here,” Christian Binner, an Alsatian natural-wine icon, nods with satisfaction as we observe the verdant vines running as far as the eye can see from his sun-laden deck. “I see Alsace as one of the historical terroirs for wine, a place where the vine is really happy to be. There’s an incredible diversity of soils, little rainfall, and low disease pressure, making it a great place for natural winemaking,” he continues. Indeed, this narrow strip of land between the Vosges Mountains and Germany is one of the leaders of organic viticulture (according to certain sources, 25% of the vineyard area in the region was either organic- or biodynamic-certified in 2019), but when Christian took over the family winery and did his first harvest in 1999, this revolution was only just unfolding.

The Binners have been farming in the village of Ammerschwihr since 1770, first in polyculture, and since WWII as full-on wine growers. Christian was lucky that his ancestors, although never officially certified, always worked the land in the organic spirit. “Even in the 1950s, when mechanization and fertilizers started to take over, my father quickly realized that he preferred to continue to work as he was used to, i.e. with a lot of handwork, manure and natural treatments for the vineyards. Thanks to this, we have this enormous luck of having vines as old as the 1930s, planted by my grandfather, that never saw chemicals in their life,” Christian retraces the family history. His father Joseph was similarly careful in the cellar, and, with the help of the legendary Beaujolais grower and natural wine trailblazer Marcel Lapierre, who became a family friend, they were already making wines without added sulfur in the 1990s.

With Christian at the helm, the Domaine Binner doubled down in this direction during the 2000s, becoming certified organic and delving deep into biodynamics while taking inspiration from working with winemaker Pierre Masson, the local pioneer of Steiner’s philosophy. “The biodynamics opens yet another social, farming and autonomous dimension of winemaking – one with way more passion and human touch,” Binner explains what led him to adopt this approach over 10 years ago, topping it off with an official Demeter certification in 2020. For Christian, it’s not just about the soil health – he convincingly describes how all the little steps that form the day-to-day biodynamic practice, from collecting the herbs used in tisanes for the vines’ immunity, folding the grass under the vine instead of mowing it, doing most of the vineyard work including spraying by hand, or working the soil with horses rather than tractors, also create a strong connection to his vines and to the local community.

His experience also shows that biodynamically grown vines perform much better when faced with the variability and unpredictability of weather that climate change brought to Alsace. “It’s definitely more difficult to get good grapes now than it was 30 years ago, but I find that our vines are naturally more resistant and we’re still much better off than our conventional colleagues, who often have to put out fires right and left,” Binner says in a podcast. To harness the power of biodiversity even more, the next step for him and his crew is now transforming some of his plots into permaculture and forest-like systems.

Inspired by the success of the biodynamics he’s witnessed in the vineyards and the one-of-a-kind architecture of Goetheaneum, Steiner’s fascinatingly odd HQ situated in the nearby Swiss village of Dornach, Binner has also had a special bioclimatic underground cellar constructed. The building took more than 5 years of careful planning and construction, and it represents a unique amalgam of local materials (such as pink sandstone from a Vosges quarry, firs and oak trees from forests near Ammerschwihr), savvy engineering and anthroposophical principles. There are no right angles or hard edges, and everything flows in curves. “And all the materials are placed the way they’re found in nature. The beams are positioned roots-down, and the stones are all orientated in the same way as they were before being quarried. This maintains proper polarization and design flow,” Binner describes in his Pipette interview how deep into detail they went during the cellar’s conception.

Both levels of the winery keep the temperature naturally stable, which has allowed Christian to make wines with better peace of mind and longer evolution. “I see how serene the people who work here feel, including me, and think the same goes for the microbiological population,” he laughs, adding that they’ve observed way less taste deviations in their wines since moving to the new facility. Keeping the yeast and bacteria happy is very important here – the Binner wines haven’t seen any added SO2 since 2013, and hence benefit from spending some time in the cellar in order to stabilise naturally. “As Marcel Lapierre used to say, natural wine should be good above all. No matter who you give it to, they should like its taste, without reservations,” Christian believes.

The longer elevages also bring on the unique terroirs he farms, including several Grands Crus. (In total, Domaine Binner makes wine from 8 hectares of their own vines and the grapes harvested from 7 hectares farmed by his friends and fellow BD growers Stéphane Bannwarth and Laurent Mandres.) Binner recalls how Alsatian winemakers used to age wines for multiple years before release, “just like in Jura or Champagne”, a tradition that was largely lost in the ravages of WW2. The local norm then shifted towards wines that are rather easy and fresh, often sweet and usually monovarietal–all characteristics that don’t sit too well with Christian.

“The more wine we make, the more I think our identity isn’t about the grape. There’s this general idea of Riesling as a light wine and Gewurz as sugary, which I find very reductive. Our wines are driven by the personality of the place where they’re born,” he explains in Vincent Sulfite’s podcast. Depending on that place, that might translate both into a monovarietal wine “if the grape is well adapted to the site and reveals the terroir,” or into an assemblage of the Alsatian grapes galore, such as the lip-smacking blend of all the kinds and colors of Pinots that he grows in the eponymous Hinterberg vineyard.

In 2015, Binner also started Les Vins Pirouettes, a smart collaborative project that helps his fellow Alsatian organic and biodynamic growers “who don’t always have the time or drive to deal with branding” to make zero-sulfur wines in their own cellars. The result is an uber-popular range of lovely wines (which have the pleasure of importing to the States as well; more on them here), confirming Binner as a truly innovative force in Alsatian wine making – a beautiful legacy for a winemaker who still has many more vintages to look forward to.

Check out Levi Dalton’s interview with Christian on episode 165 of the I’ll Drink to that Podcast!

Riesling Champs des Alouettes (formerly know as Riesling Katzenthal): — Back to the top 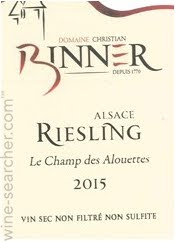 Vinification Method: All grapes are hand-harvested in October and undergo a long slow press. The juice sees low temperature fermentation and the wine is aged in 100-year-old barrels on fine lees for 11 months. No chemical yeast is added to the wine, and the wine is bottled without filtration. All wines are held at the vineyard until Christian Binner decides that they are ready for release.

Pinot Noir— Back to the top 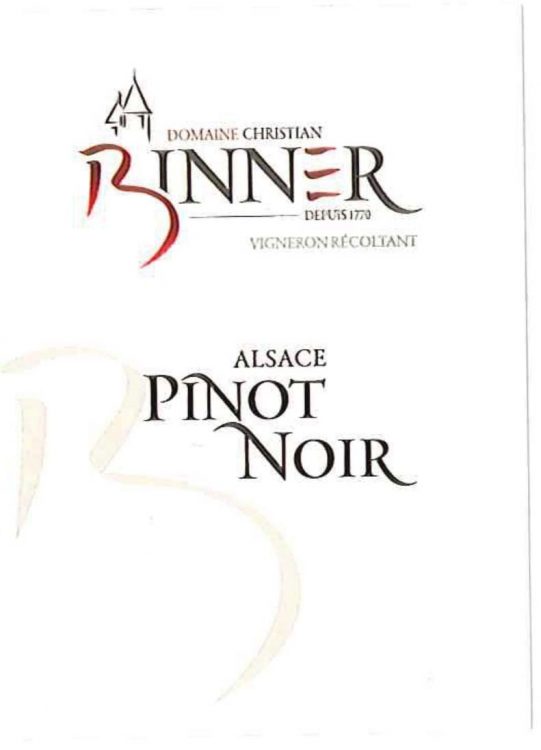 Viniﬁcation: This wine is whole cluster fermented in large foudre, using only indigenous yeast. It spends about 11 months in elevage in foudre and is racked once in spring. Sulfur is never added to this wine and it is unfiltered.

Pinot Noir Beatrice— Back to the top 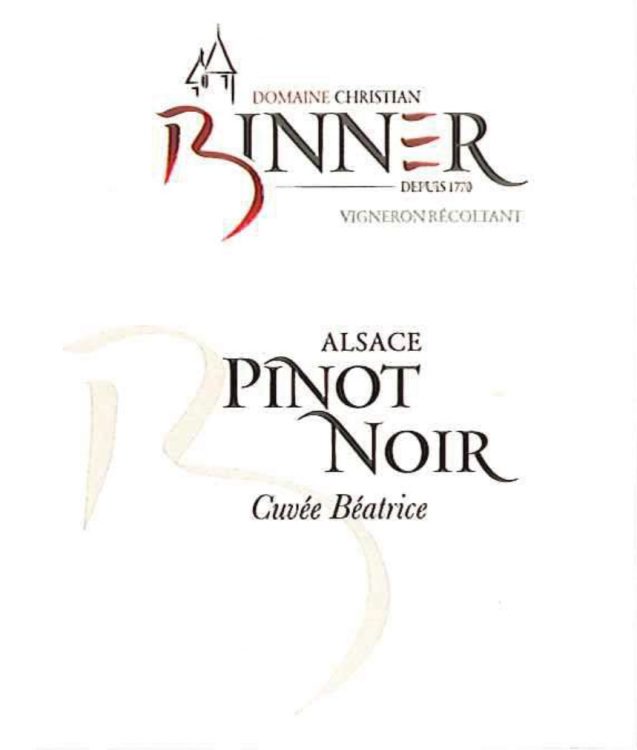 This wine is named for Christian’s sister Beatrice.

Vinification notes: This wine is whole cluster fermented in large foudre, using only indigenous yeast. It spends about 11 months in elevage in foudre and is racked once in spring. Sulfur is never added to this wine and it is unfiltered.

Hinterberg les Pinots— Back to the top 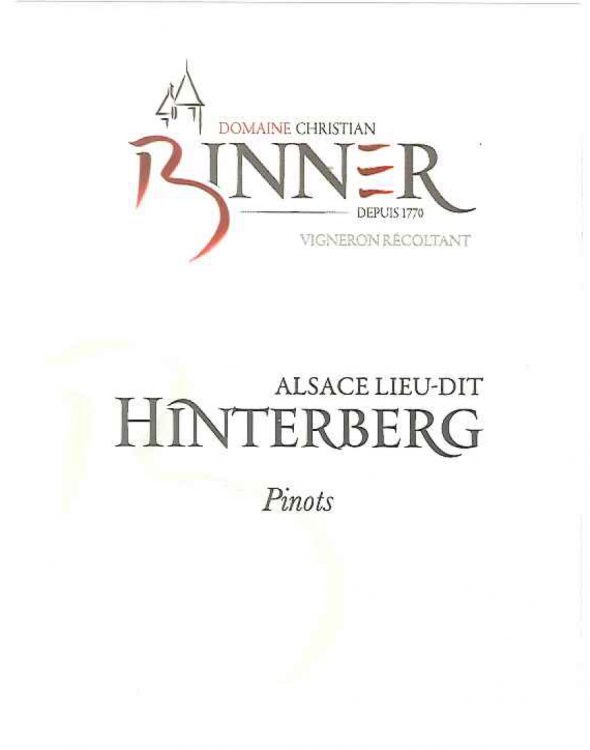 The Hinterberg Vineyard is in the Katzenthal Valley with very sharp angled hills facing South. It is situated in the same geologic formation as the Grand Cru Schlossberg vineyard.

Vinification notes: This wine is a blend of red and white grapes left on the skins for a short time, hence the red grapes contribute a rosé element and the white grapes contribute a macerated element, thus this falls under the new category we (thanks to Christian Tschida) like to call pink maceration. Sulfur is never added to this wine and it is unfiltered.

Cotes d’Amourschwihr— Back to the top

Varieties: Field blend of Riesling and Pinot Gris mainly with a bit of Gewurztraminer, Muscat and Auxerrois.

Sylvaner— Back to the top 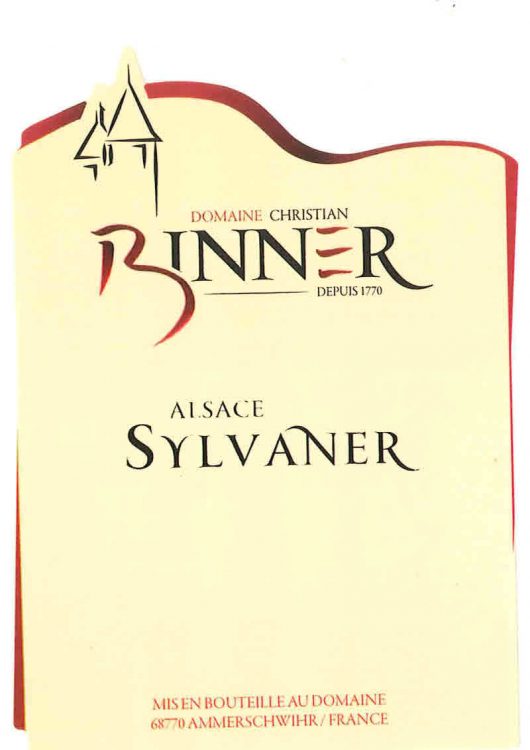 All grapes are hand-harvested in October and undergo a long slow press. The juice sees low-temperature fermentation and the wine is aged in 100-year-old barrels on fine lees for 11 months. No chemical yeast is added to the wine, and the wine is bottled without filtration. All wines are held at the vineyard until Christian Binner decides that they are ready for release.

Si Rose— Back to the top

This cuvée was originally inspired by Severine Peru formerly of Ten Bells in New York City and was an exclusive wine sold only there, but now is available for everyone to enjoy (although in very small quantities). The name is a macabre play on words – the French pronunciation of Si Rose is the same as cirrhosis, hence the liver on the label. 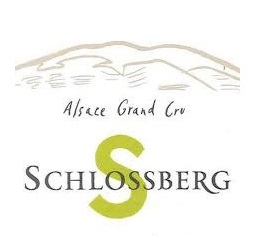 Riesling Grand Cru Schlossberg— Back to the top

Schlossberg, the Grand Cru vineyard where this wine is born, is a very solar, full-south site, whose warm days are contrasted by nights cooled by winds from the nearby Vosges mountain range – a combination that’s perfect for wine with flamboyant aromas yet very fresh. Its poor, well-aerated soil gifts the wines with a compelling finesse, although they might take some time to develop, both in the cellar and in the glass – after all, this is a grand cru, meant to last!

Vineyard: Schlossberg, majestic terraced slope with full south exposure. Almost half of the vines are 60 years old, the rest is about 40yo. Poor sandy-granitic soil.

Making of: The grapes are hand-harvested and gently pressed. The alcoholic and malolactic fermentations happen spontaneously over many months with natural yeasts in old oak barrels. Aged 11 months on the lees in the same vessels, bottled unfined and unfiltered, zero sulfur added.

Personality: lush exotic & candied fruit mingled with sweet spices and citrusy notes. Wonderful structure and acidic backbone that asks for another sip. Vibrant, salty, mineral, persistent: you name it. Best served after some time in carafe, in a big enough glass.