Château Meylet is on the Western slopes of Saint-Emilion. It is a family vineyard since 1875, when it was called the Clos Le Clou. It’s terroir is situated along the fortress walls of the Grandes Murailles, between the classified Grands Crus of Laroze and Franc Mayne near the “Gommerie,” one km from the heart of Saint-Emilion. Michel Favard could be called an artisan-winemaker, he takes care of the vines he inherited from his great grandfather who came from the Auvergne to St Emilion at the end of the 19th century, who was in the textile industry, but by passion, bought his first hectare of vines. In the same spirit, his grandfather planted more vines, but kept his job as a carpenter. Michel is the first “full-time” winemaker of the family. In 1978 he did his first harvest under the name Château Meylet after some years of bringing the grapes to the cooperative. In 1984 he acquired a plot near the Gomerie just next to the cellar.

The vineyard is 75% Merlot and 25% Cabernet Franc and Sauvignon planted at a density of 7000 vines/ha. Since 2010, Chateau Meylet uses horses to work on their plots. 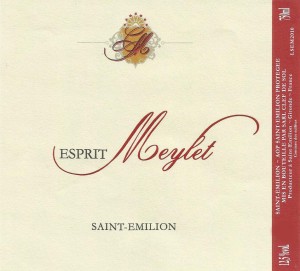 Vinification Method: Fermented in two 50 hl oak tanks. No pumps are used. Michel uses the stomping techniques that he brought back from Burgundy to do a soft extraction. No added yeast, no added sugar, SO2 only at bottling. No filtration or fining. Aged two years in barrels (20 to 40% new oak).