Checking All the Boxes

Management: biodynamic on their own sites, organic to conventional on purchases

“Yeah, most of my wines are now not getting scoffed at tastings,” Todd Cavallo comments on his boutique production as we follow him from a small shed filled with tanks and barrels to a couple of newly planted rows of vine on his Hudson Valley property. What an understatement: Wild Arc’s stuff has become so popular that, unless you jump on a bottle with the characteristic minimalist white labels right when you see one, you’ll probably risk waiting until the next vintage.

All this happened very quickly — the former Brooklyn IT specialist and his wife Crystal moved upstate in 2016 without any previous agricultural experience. A couple of years later, they’re growing their own fruit & veg in biodynamic permaculture, looking forward to the first vintages from their recently planted two acres of Cabernet Franc, Pinot, and Chardonnay, all while getting mad props for their current produce.

Their low-sulfur, often carbonic macerated wines offer a generously fruity character with lively acidity, definitely checking all the boxes of drinkability and current tastes. Being a small farm at the beginning of its journey, Wild Arc sources fruit from other people in the area: “Our hope is to establish relationships with growers and help them move towards organic production, which we feel is “greener” and more sustainable than continuing to replace the native habitat with more vineyard plantings. We are also sneaking codes onto all our labels now that delineate growing practices and sulfur usage, so the consumer can know exactly what the differences are in our bottlings,” Todd explains.

But the one thing that has created the buzz around Wild Arc Farm is not exactly wine: it’s Piquette. By adding his own touch to the centuries-old French practice of making a “second wine” for the vineyard workers from the already pressed skins, Todd has hit that soft spot that many of us have for drinks that are light on alcohol but strong in fun, fizz and freshness.

“Rather than a watered-down wine, it’s actually a boozed-up piquette,” Todd explains what has made his endeavor so different and successful. In his method, the skins (called pomace) are soaked in water for a couple of days, pressed, left to ferment, and then blended with some of their original wine. Bottled at about 7% ABV with some local honey that acts as a re-fermentation starter in the bottle, the resulting beverage bears the aromatic profile of the grape but in a lighter version, all accompanied by a pleasant sparkle and an exotic flavor-kick from the honey. It’s the wine cooler that’s actually cool, as the Piquettes’ own labels state.

Given their instant success,zero-waste, and low-ABV appeal, it’s no wonder that Piquette has become ubiquitous over the last couple of years, with winemakers around the globe willing to put their own skins into the trend. As for the one who (re)started it all, he seems to have his eyes on new horizons again: be it arak, wine’s role in climate change, or PiWis, you can be sure that Todd Cavallo won’t be resting on his laurels.

Riesling barrel 1 — Back to the top 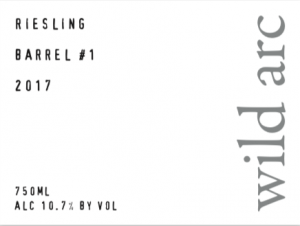 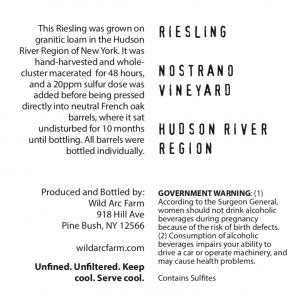 Vinification: The fruit was foot-tread and whole-cluster macerated for
48 hours with a 20ppm S02 dose. It was then pressed directly into
neutral oak barrels where the native fermentation completed fairly
rapidly. Slight reduction issues arose in barrel which were alleviated
by occasional stirring with a copper rod. Malolactic fermentation
began naturally in the Spring. Barrel 1 was bottled after 12 months in
barrel, a few months before barrel 2.

Notes: These are fairly atypical rieslings due to the elevage in
neutral oak and completed malolactic fermentation. Both bring a
roundness and fatness to the palate that belies the low alcohol. It’s
as if someone was able to make a 10.7% riesling in Alsace. Think key
lime pie with extra whipped cream followed by a glug of mineral water.

Checking all the Boxes Pet Nat — Back to the top

This Marquette/Traminette pet nat really does check all the boxes, the 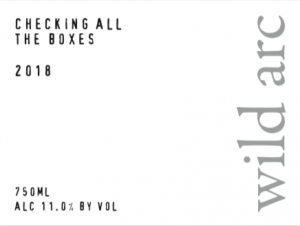 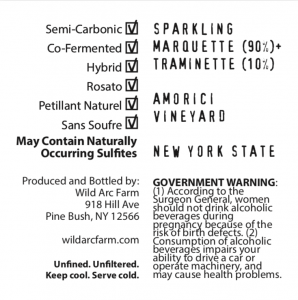 most important of which is that is was grown without any herbicides,
pesticides, or synthetic fungicides, and it was vinified without any
added SO2.

Vinification: 2 day carbonic maceration, then direct pressed into
tank. Native fermentation, bottled at .8 brix. Manually riddled by
driving upside down cases around in a golf cart. Disgorged by hand in
March 2019.

Pairing: Carbonic Marquette — Back to the top

Another fun take on the organically grown Marquette. Somewhat in the 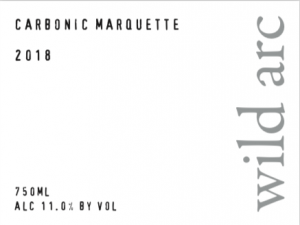 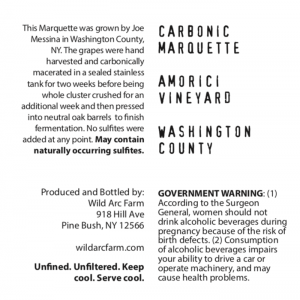 Nouveau style, but with a little more structure from some
whole-cluster maceration.

Vinification: Full 2 week carbonic maceration in sealed stainless
tank, then foot-tread for an additional 3-day maceration on skins and
stems. Pressed directly into neutral oak barrels. Aged for 6 months in
barrel, then bottled for an early release.

Notes: Bright carbonic character on the nose: banana Runts, Bazooka
bubblegum, and strawberry candies. Broader and slightly structured on
the palate with darker fruit and some garrigue, and a bit of texture
on the finish.

Sweetheart — Back to the top

A fun experiment in blending apples and grapes. 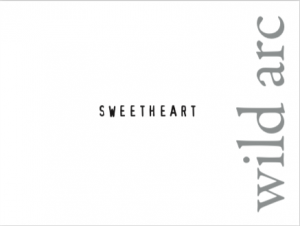 Vinification: The cider was fermented to dryness in 2017 and after a
minimal sulfur dose its was bulk-aged in tank for a year. After the
Teroldego was pressed off for our wine in 2018, we transferred 2
barrels of the cider onto the spent grape skins and let it age for 2
months before pressing into neutral oak for another 4 months. No
additional SO2 was added at this point or during bottling. Bottled
with local wildflower honey to referment in bottle.

Notes: Like pink Hawaiian Punch: tart, refreshing, and and tropical.

Vineyard production for the Cab Franc at Bruynswick Vineyard was down 85% for 2018, so the entire 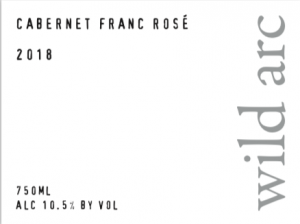 harvest went into these 20 cases of rosé. Obviously extremely limited. 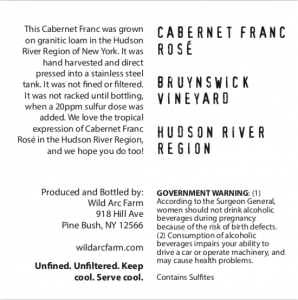 Vinification: Half direct-pressed and half with 2 hours of whole-cluster maceration, we experimented with zero sulfur additions at crush this year. Fermentation finished quickly but malolactic fermentation started showing some signs of trouble this Spring so we hit it with a small 20ppm SO2 dose prior to bottling.

Notes: An intoxicating combination of bright red and tropical fruits and dusty minerality. Raised in stainless steel but with full natural malolactic fermentation for roundness and body.

Piquette — Back to the top 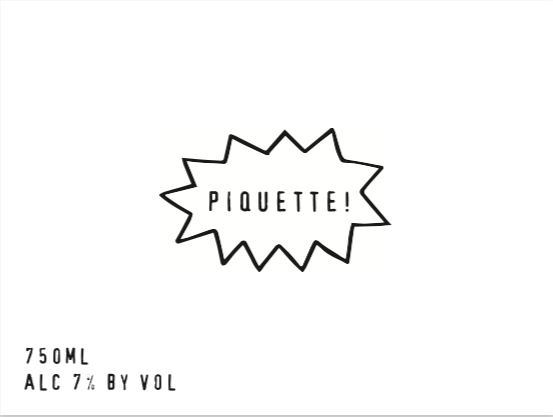 Piquette has become quite a phenomenon recently, with several wineries bottling something similar,
often using the name piquette on the label (with Todd’s blessing), but Todd should really be credited with bringing this style back. Orginally piquette was something wineries would serve to their harvest workers. Something pleasant they could drink that wasn’t so high in alcohol they wouldn’t be able to work hard in the vines. The basic concept is to use the cast-offs from winemaking, including the leftover must, stems and seeds included. The must is soaked in water and ferments to a low alochol fizzy beverage thanks to the addition of something sweet (local honey in Todd’s case).

Vinification: Piquette was made from all our spent grape must this year. We are releasing 50 cases each of 4 varietal piquettes for Spring. They were all blended with wine at press to bring them up to 7% ABV. There were no additional SO2 additions beyond what was residual in the must other than a small dose added to the Cabernet Franc at bottling. We have the return of Traminette and Cab Franc from last year, plus a 100% Riesling and a new Teroldego bottling.

Piquette Rosado Cans: Todd canned up some piquette also. The base wine is a blend of mostly Noiret and Cayuga, but also contains some Riesling, Chardonnay, and Teroldego. 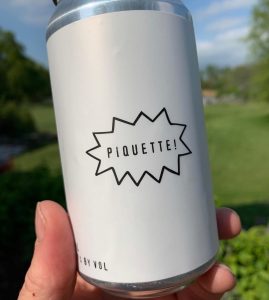 The Traminette version is a Lychee-Elderflower soda poolside at the Ritz.
The Cabernet Franc version is a dry lambrusco with a prosciutto pizza at your favorite sidewalk bar.
The Teroldego version is a raspberry soda on the first day of summer.
The Riesling version is a sparkling lemonade beside a bonfire on a hot summer night. 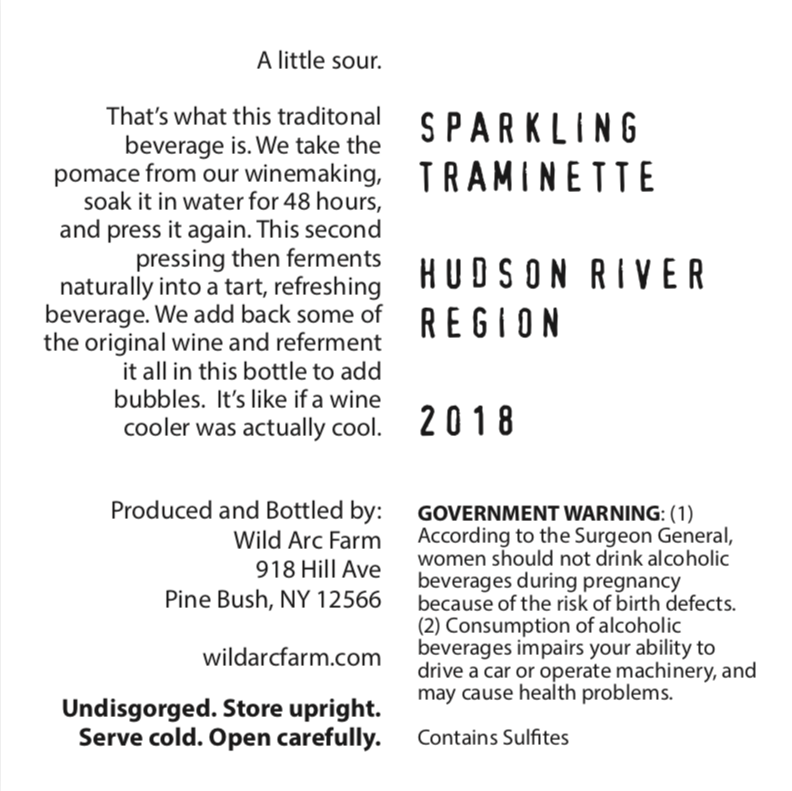 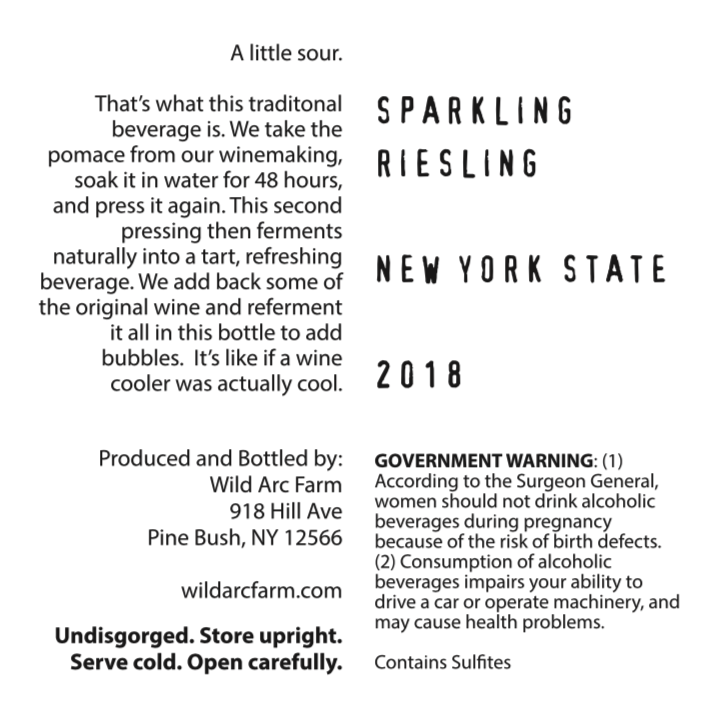 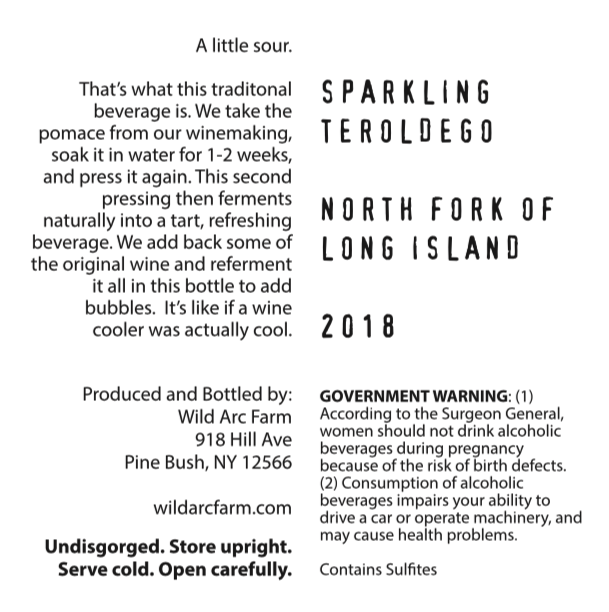 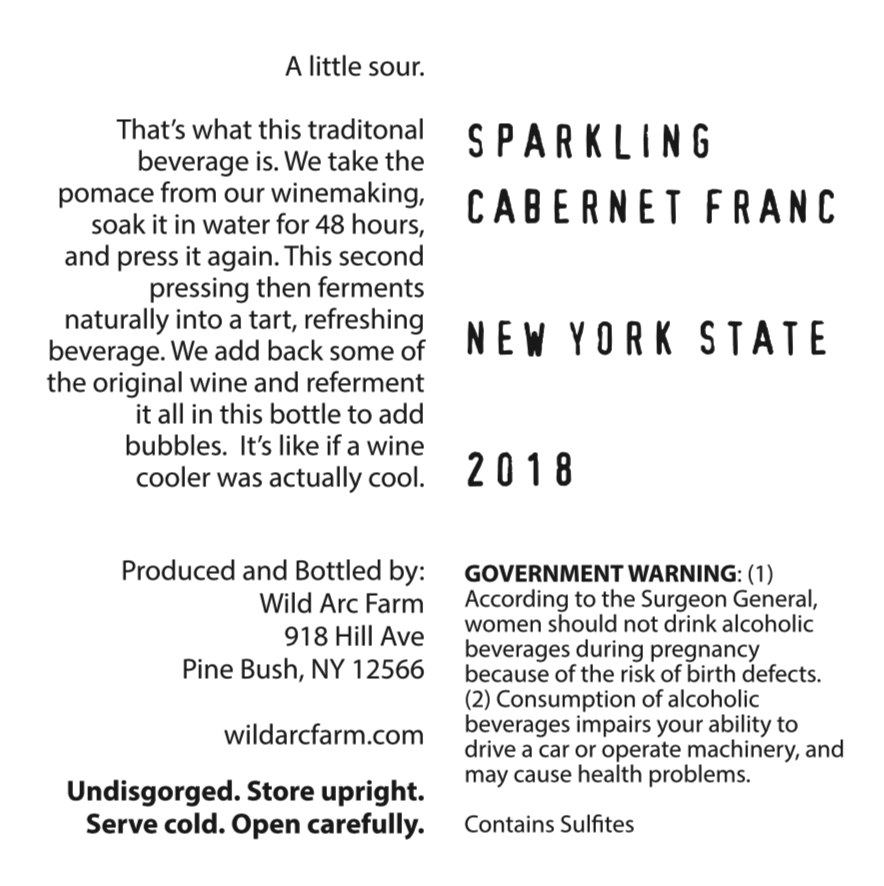 Bi-Sekt — Back to the top 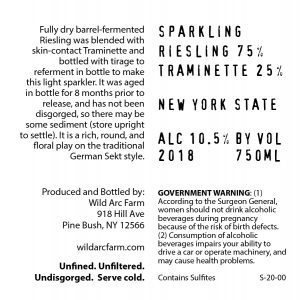 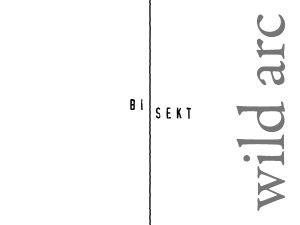 We’ve been sitting on this one for a bit, letting it get some time in bottle to develop. It is our take on the German Sekt style, for which we’ve blended Riesling and Traminette and sparkled it up with a tirage of local wildflower honey.

Vinification: Both wines were barrel fermented to dryness with 20ppm SO2 added at crush, then 75% Riesling and 25% Traminette were blended in a tank with 12g/L of wildflower honey and bottled under crown cap. Unfiltered and undisgorged.

Amorici Field Blend Rosé — Back to the top 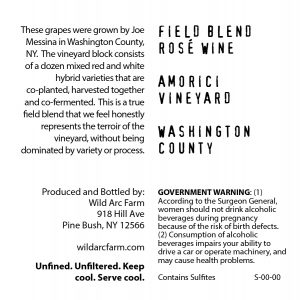 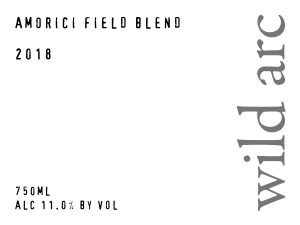 Our second vintage working with the beautiful fruit from this vineyard which we have now moved to fully organic practices.

Vinification: The dozen red, white, and pink hybrid varieties were all harvested together, and the fruit was destemmed and macerated for 2 days before being pressed off and blended.

Notes: The foxiness or “grapeyness” of hybrid grapes disappears in this blend into a candied fruit character that puts this wine squarely in the Glou Glou camp. Though it starts with some dried herbs and spice on the nose, quickly the tart strawberry, cranberry, and cherry all start coming through with some air, and there is similar red-fruit salad that fills the mouth with each sip.

Hudson River Region Chardonnay — Back to the top 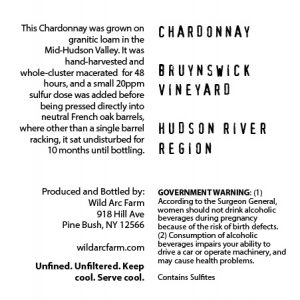 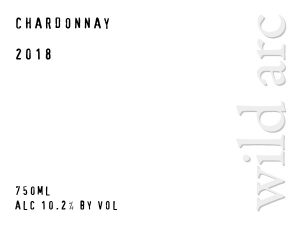 Our 2017 Chardonnay was the sleeper hit of the vintage, and the few remaining bottles are showing better and better. Don’t sleep on this one, Jura meets NY as oxidative and reductive tendencies meet, and fruit and mineral notes clash to make a Chardonnay that is a joy to drink.

Vinification: Half was whole-cluster macerated for 48 hours and half was direct pressed, all into neutral French oak barrels. No racking or stirring. Bottled without any additional Sulfur.

Notes: Peach, apricot, and a whisper of tropicalia with some wet stone backing up the nose. Broad and mouth-filling with some richness and texture, but still an acid streak to make you want another sip immediately.