Barry Family Cellars was founded in 2011 by Ken and Ian Barry in Burdett, New York, near Seneca Lake in the Finger Lakes Region. Ian worked at wineries in the Hudson Valley, Oregon and Washington, and makes the Barry Family wines with techniques he personally enjoys, eschewing intervention in favor of more minimalist techniques.

The Pet Gnat wines got their inspiration from Ian’s son Declan. He overheard his Dad discussing making a pet-nat with some winemaking friends, and thought they were getting a new pet gnat. They joked about how they’d have to have a leash for the new pet. Declan’s drawing, spruced up by Ian’s father Ken, a lifelong artist, is the art work featured on the label.

Riesling Pet Gnat — Back to the top 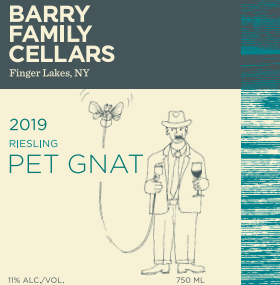 This wine was grown in the Hobbit Hollow Vineyard on Skaneateles Lake (pronounced skinny atlas) in the eastern reaches of the Finger Lakes.  The grapes were hand picked at 19.2 brix on October 10th and whole cluster pressed the same day.  The juice was cold settled for 3 days and then allowed to warm to ambient temperatures and spontaneous fermentation began.  It was bottled at 1 brix and allowed to finish fermentation in the bottle, unfined, unfiltered and without sulfur added.

Pinot Noir Pet Gnat — Back to the top

This wine was grown in the Sawmill Creek Vineyard in Hector, NY on the eastern shore of Seneca Lake. These grapes were farmed using focused heat as a pesticide in lieu of chemical pesticides.  Harvested by hand on September 19th at 18.9 brix and very gently whole cluster pressed the same day. The juice was cold settled for 48 hours and then allowed to come back to ambient temperatures and ferment spontaneously.  Bottled at 1.2 brix and finished in the bottle with no filtration, fining, or sulfur added.