Dimitrios Kioutsoukis’s family hailed from East Romylia back to the early 1900’s. The family had always harbored a dream to make wine like their ancestors, but lacked the finances to start a winery. Dimitrios trained and worked as a chemical engineer originally, and worked for many years in the medical field, to save money to fulfill this winemaking dream. The region he lived in, Thessaloniki, in northern Greece, had been well known for the cultivation of vines, but since phylloxera cultivation had all but died out. He studied winemaking through the UC Davis extension program and decided in 2010 to plant 11 hectares of vines of Greek varieties including Assyrtiko, Malagousia, Roditis, Xinomavro, Limnio, Muscat, and Moschfilero.

From the very beginning the vineyards were worked only in accordance with long-standing traditions, like manual pruning, hoeing of weeds, and harvesting, and use of natural sprays made from plants like nettle and yarrow, and composting and fertilization with natural manure. They always sought to do as few treatments as possible, to maintain balance with the natural way of the vines and nature. Then in 2015, with his daughter Stavroula, an agronomist and oenologist, he took the giant step of converting all his production to natural methods. The wines are now all naturally fermented with indigenous yeasts, have no products added or subtracted, are not filtered, and have zero sulfur added at bottling.

Retsina — Back to the top 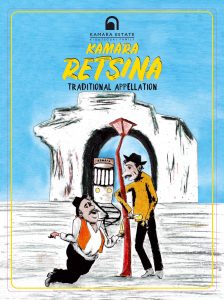 History of the label: Retsina is a famous traditional Greek wine enjoyed for at least 3000 years. Even in modern Greece represents the classical ubiquitous style of wine. It can be found on wine list of every greek tavern, even the most sophisticated upper-class restaurants. The arch (in greek Kamara means arch) is the most famous meeting point in Thessaloniki, where people get together, like a wine that brings people closer to each other.

Vinification Method: The grapes are destemmed. Cool fermentation in stainless steel tanks. Small pieces of Aleppo Pine resin from the mountains of Evia island, added to the must during fermentation gives to the retsina its unique character and aroma.

Pet Nat — Back to the top

History of the label: In 2017 my two daughters got married. They asked me to make a good sparkling wine for their marriages. In this time I had a fermenting must of Xinomavro. So I put into some bottles a little bit of the must and the rest I filled it with Nimbus Albus of the past year. And so this wine begun its journey…

Vinification Method: After halting primary fermentation, we brought the blend of Assyrtiko 50% and Malagouzia 50% ready wine down to a cool temperature and let it settle off of its primary lees. Next year we add fermented must of Xinomavro to this ready wine in the bottle provides the sparkle and leesy feel as it gets turned into alcohol and CO2. We do not disgorge, leaving the wine hazy, creating broader palate weight, pleasing textures, and balance throughout. This special bottling is done entirely by hand. After the bottling, we do remuage the bottles for 3 weeks. After we let the bottles stand for at least 3 months before to be ready for sales.

Nimbus Albus — Back to the top 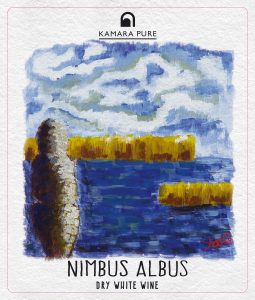 History of this label: The label is a painting of our lakes during a cloudy day, as Nimbus means cloud and Albus white. The Nimbus series are natural non-filtered wines, giving their hazy hue and an uplifting but soft and round feeling, kind of what drinking a cloud would taste like.

Vinification Method: The grapes are destemmed and the varieties ferment separately in stainless steel tanks (controlled fermentation temperature 18º- 21º C) with indigenous yeasts, no oenological substances added. Spontaneous malolactic fermentation. The produced wines were blended, racked from the very dense sediments and sur-lie on fine lees for three months in old barriques (225 liters each). No protein stabilization, only tartaric stabilization. The wine is skin maceration with a cold soak, before the fermentation for 2-3 days depending on the year in low temperature (5-8ο C).

Nimbus Ritinitis — Back to the top 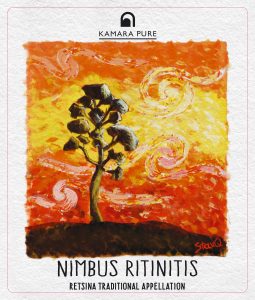 History of the label: The recipe of this retsina came a century ago to our family by our grand grandfather who was a winemaker in East Romilia- a region located at present Bulgaria. Its name means orange cloud and it pictures a landscape in our vineyards during the early evening hours.

Winemaking: The Assyrtiko macerates on the skins in stainless steel tanks with the must for 5-7 days at low temperature. The grapes are destemmed. After removal of the pomace, the must produced by the first run juice ferments at 18º- 21º C for 20-30 days. During the fermentation high-quality Aleppo pine resin from the mountains of Evia is added, following an ancient recipe. Spontaneous alcoholic fermentation with indigenous yeasts, no oenological substances added, followed by spontaneous malolactic fermentation. The produced wine is racked from the very dense sediments and sur-lie on fine lees for three months in old used barriques. No protein stabilization, only tartaric stabilization. Unfiltered and no added sulfites, only naturally occurring sulfites from fermentation.

Nimbus Russus — Back to the top 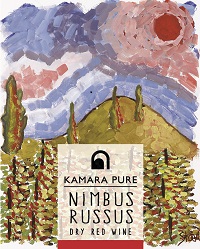 History of this label: Nimbus means cloud and Russus red. The Nimbus series are natural non-filtered wines, giving their hazy hue and an uplifting but soft and round feeling, kind of what drinking a cloud would taste like.

Winemaking: Co-vinification of Merlot and Syrah and separate vinification of Xinomavro. Spontaneous alcoholic fermentation with indigenous yeasts, no oenological substances added. The wines are blended and aged for 12 months in old barrels. Battonage sur lie for 3 months. No fining or filtration, zero sulfur added.

Personality: hearty, warm red transporting you right away to holiday in Greece: berries, plums and liquorice combined with notes of eucalyptus, black olives and intense black pepper. In the mouth, notes of black and green pepper, cinnamon and nutmeg are complemented by fresh earthy notes and hints of dark chocolate. Velvety rounded tannins due to the year spent in old oak barrels. Perfect with roasts, BBQ or game.

Stalisma Rosé — Back to the top 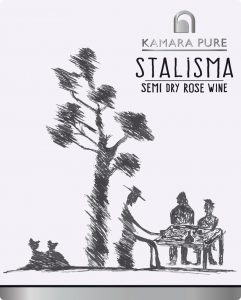 History of this label: “Stalisma” means a nice, relaxing break in the shade; exactly what this wine is the perfect partner for.

Winemaking: The wine ferments with indigenous yeasts, with no added oenological substances. Aged in old barrels for 2 months, batonnage with its own fine-lees. Bottled at the beginning of the next spring, no sulfur added.

Personality: affable, fun rosé. Sun-dried tomatoes and black olives on the nose, typical for the Xinomavro variety, mingled with strawberry and blackberry. Rich and persistently fruity, with a little touch of residual sugar; serve with moussaka or some good Feta & watermelon salad to complete the ‘Greek summer’ sensation.