Raphaël Bartucci is a self-taught winemaker. His parents fled fascist Italy and moved to the Moselle in the 1950s. They came to the Bugey region during summer vacations, and this gave Raphaël the desire to become a farmer. He bought a house in ruins in the town of Mérignant where he still lives.

Raphael began planting some vines, but didn’t like what seemed to be the general way of doing things with chemicals and additives. Through friends, he met Pierre Overnoy and Marcel Lapierre, who told him that he was right to want to make wines differently than his neighbors.

Each year he planted a few vines, and today he has reached 2.10ha on 10 different plots! Until 1992, he worked during the day and took care of his vines part time during the evenings and weekends. But since 1992, he worked full time with his vines, making and selling them. 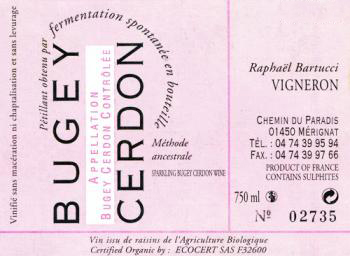 Vinification Method: Sparkling obtained by spontaneous fermentation in the bottle, or “methode ancestrale.”  That is when two thirds of the fermentation happens in tanks, after which the unfinished wine is bottled. The bottles are put upright for about three months. The fermentation stops because the bottle is saturated with the CO2 produced by fermentation, where there is about 40 grams of residual natural sugar left per liter. It is then disgorged, and no sulfites are added.

Tasting Note: A semi-sweet sparkling wine with about 8% alcohol. A refreshing sparkler that is crisp with fresh strawberry aromas.