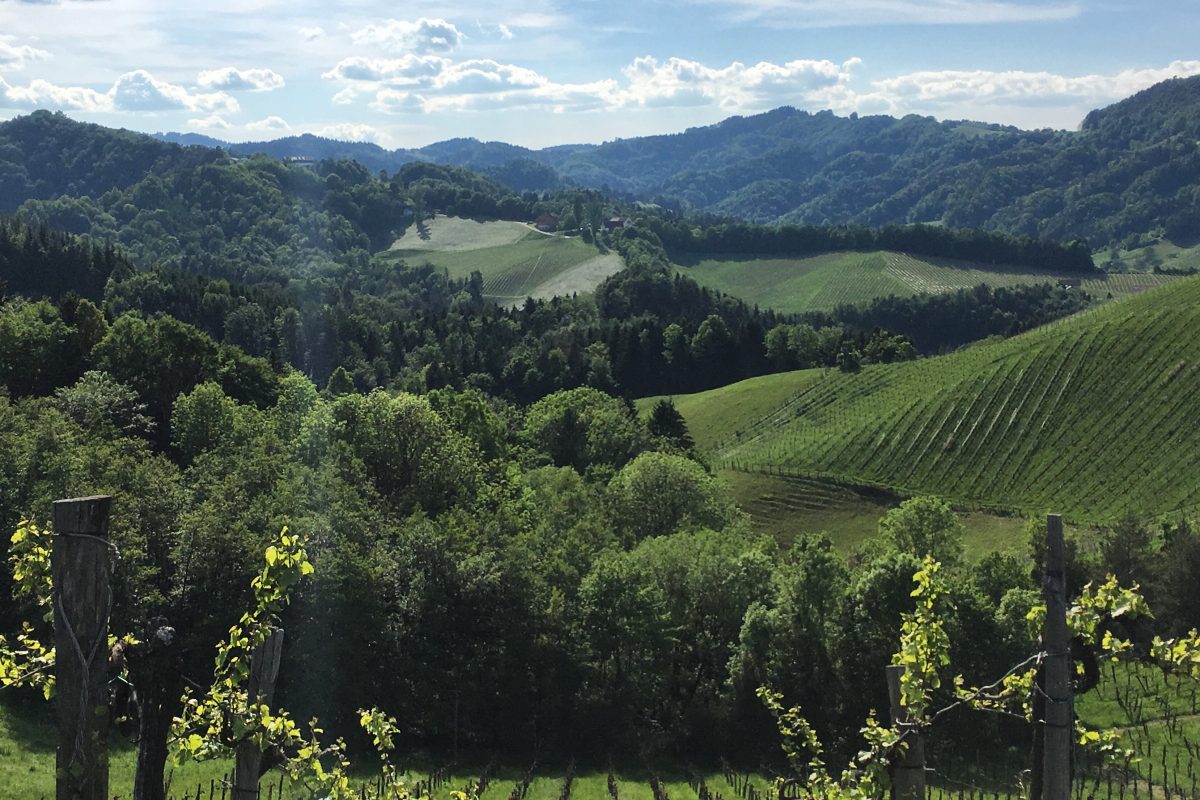 After many years of making the annual trip to France, the J&F team (plus a few industry colleagues) traveled to new territory in Central Europe this Spring to explore vineyards in Austria, the Czech Republic and Slovakia. A few years ago, natural wine producers from this part of the world were largely unknown in the US, while today they are crafting important and sought after wines in the US and the wine world in general. We’d love to share some details and photos from each visit; this is one of a handful of posts you’ll see. 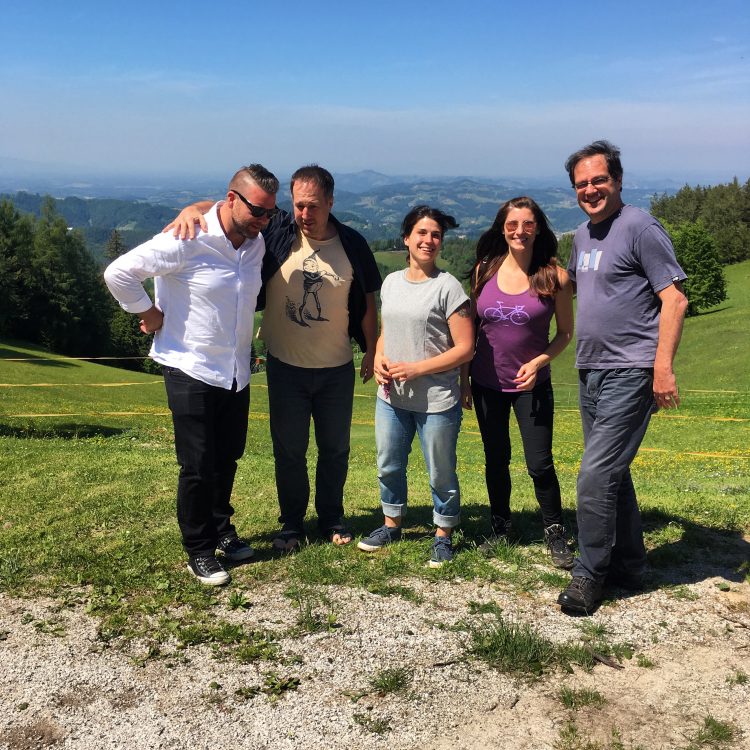 The team after visiting Muster, at the top of Heiligeistklamm on the Slovenian border.

Our trip began in Vienna where we picked up our car and drove 2.5 hours to Styria in Southeast Austria to visit with Maria & Sepp Muster, just steps from the Slovenian border. In fact, we were lucky enough to join Maria to hike the Heiliggeistklamm (Holy Ghost) the next morning, which actually ends in Slovenia. 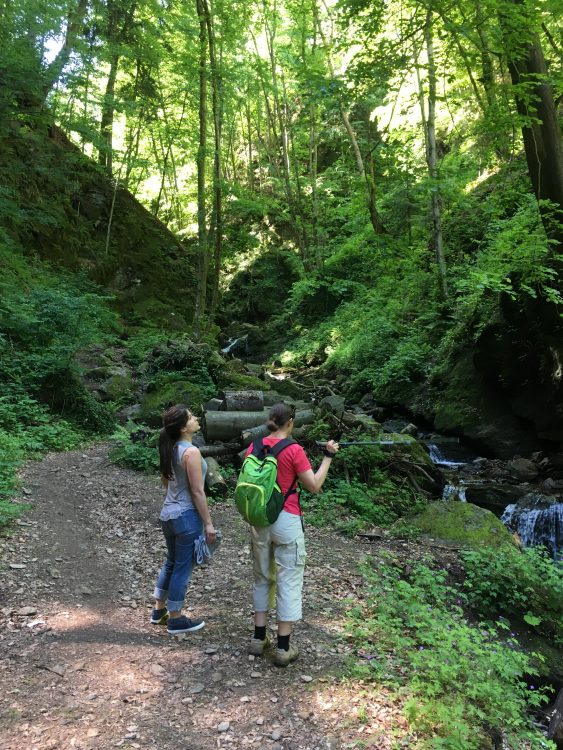 Styria, or Steiermark in German, is considered the green heart of Austria – an obvious name, we realized, after exploring the never ending steep, green vineyards. The Musters are in Südsteiermark, where they live with their three children and biodynamically farm a 10 hectare vineyard previously belonging to Sepp’s father. The estate can be dated back to 1727. They grow 7 varieties: Zweigelt, Blaufrankish and Blauer Wildbacher for reds; Morillon (chardonnay), Sauvignon blanc, Gelber Muskateller and Welschriesling for whites. Everything is planted on steep vineyard sites, 400 meters high, on soil known locally as “Opok.” At a glance, it looks like schist but the Opok soil is a mixture of clay and silt. Some of the neighboring vineyards reach heights over 700 meters. 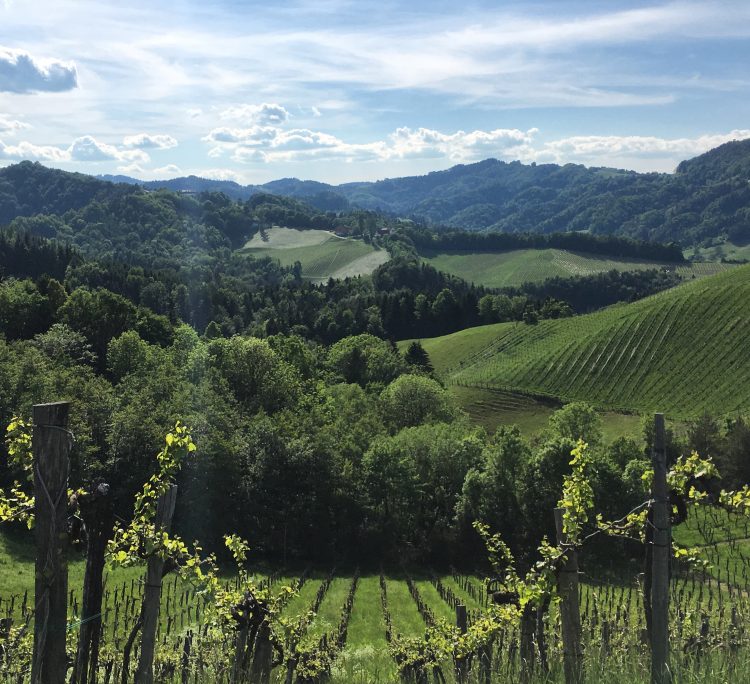 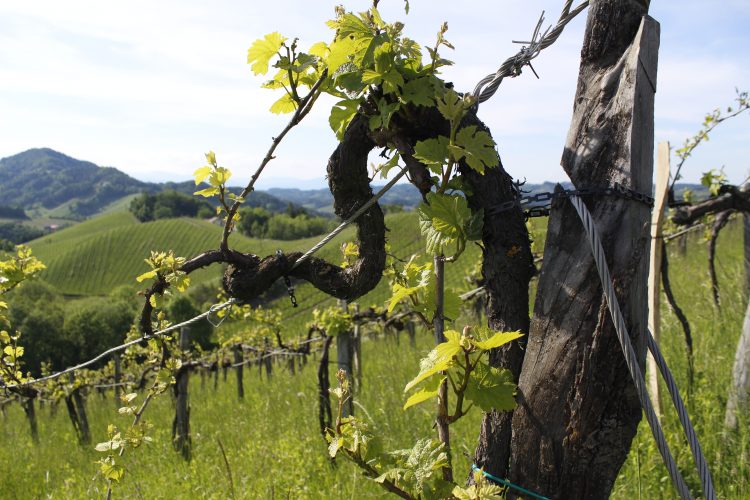 Sepp, or “Seppi,” (a childhood nickname Maria and local friends still use), has never read a book on biodynamics but instead builds his extensive knowledge from the hands-on experience of working with nature for so many years. Sepp says it’s important to have a group of likeminded winemakers to discuss ideas with, which he has done for a long time. While all natural winemakers don’t have the same vision for their process, it benefits everyone to come together and converse about their experiences in the vineyard and winery. 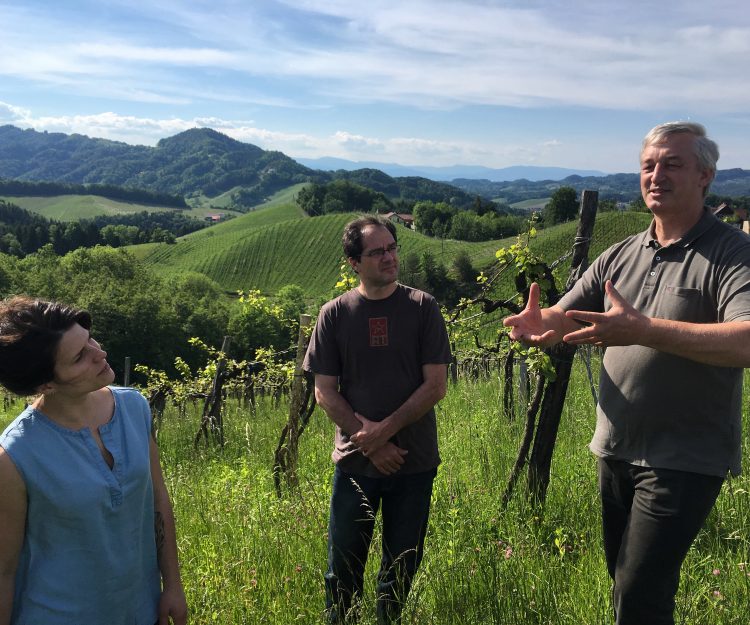 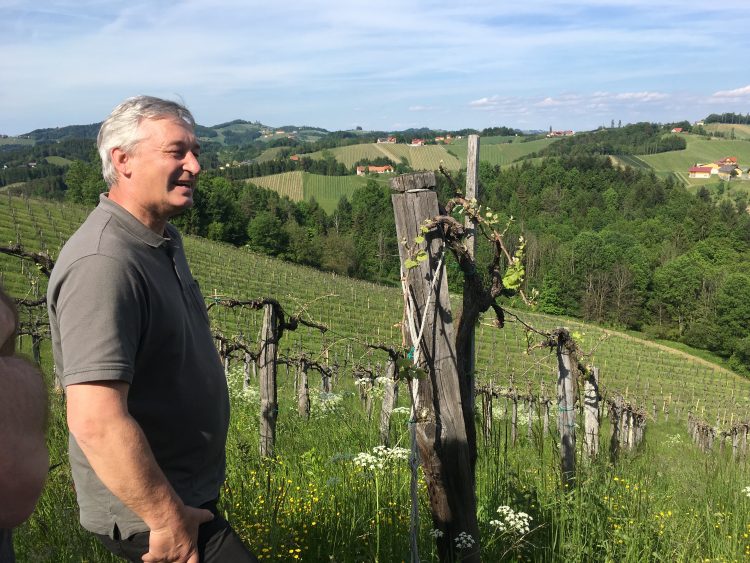 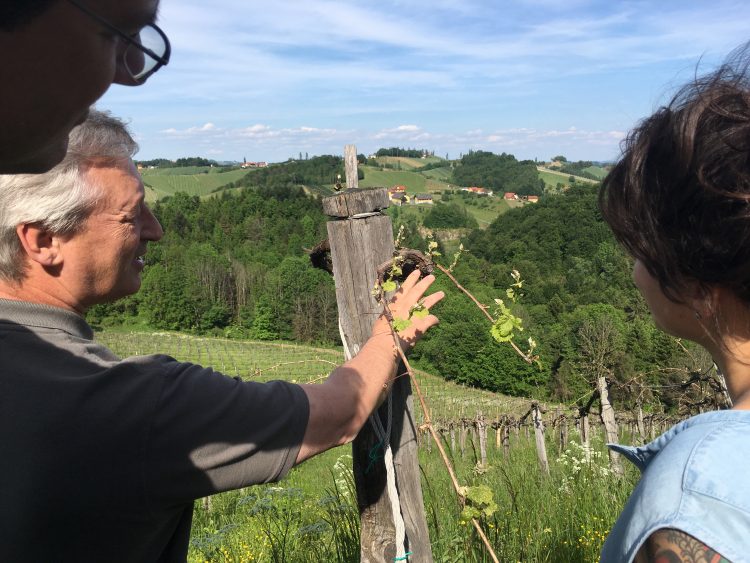 Though Styria faces a tough year, with some of the worst frost to hit the region in 100 years, The Musters remain positive and hopeful, believing “all good and bad in the vineyard happens for a reason. We might not see what that reason is for 5 years, but there is always a reason.” Despite the terrible frost earlier this year, the region has actually warmed over the years which Sepp says has been a positive evolution so far, but of course could become a problem if the pendulum swings too far.

The Musters hand craft a variety of cuvées, the Vom Opok line from the main vineyards on Opok soil, with other cuvées from the Sgaminegg and Graf vineyards which are also on Opok soil but have steeper southern-facing slopes and lower yields. The latter two tend to have more extraction, density and a higher mineral character. While a few of their white wines have brief contact with the skins, they also make two lovely orange wines with extended skin contact, Gräfin, which means “countess” and macerates for a few weeks, and Erde, or Earth, which macerates up to one year with skins and stems. 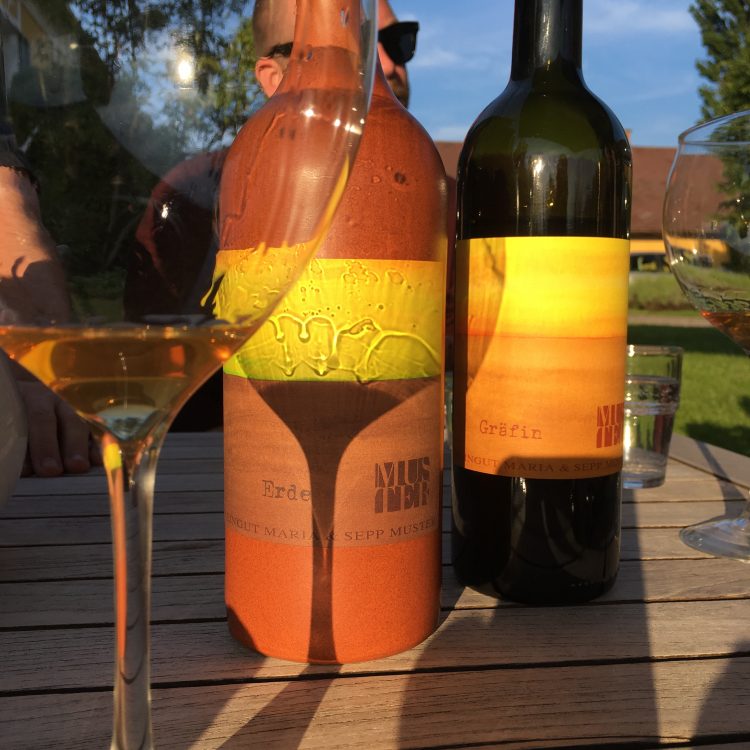 Grafin and Erde 2013 just landed in NY! Skin fermented whites that are super fresh, juicy and herbaceous with notes of tangerine skin. A bit more stem tannin and bolder flavors in the Erde. 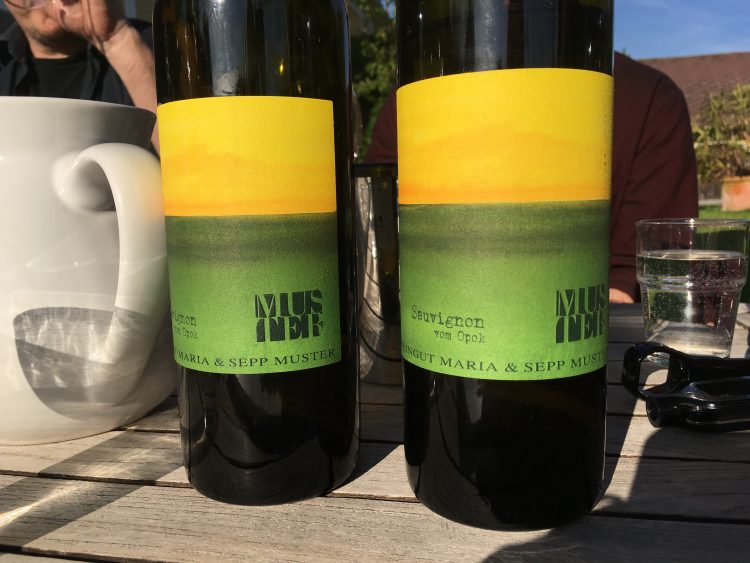 2013 Sauvignon Vom Opok is here in NY! Fresh acidity, lemon & salinity. This was a very good vintage producing earthier wines with great ripeness without being heavy. 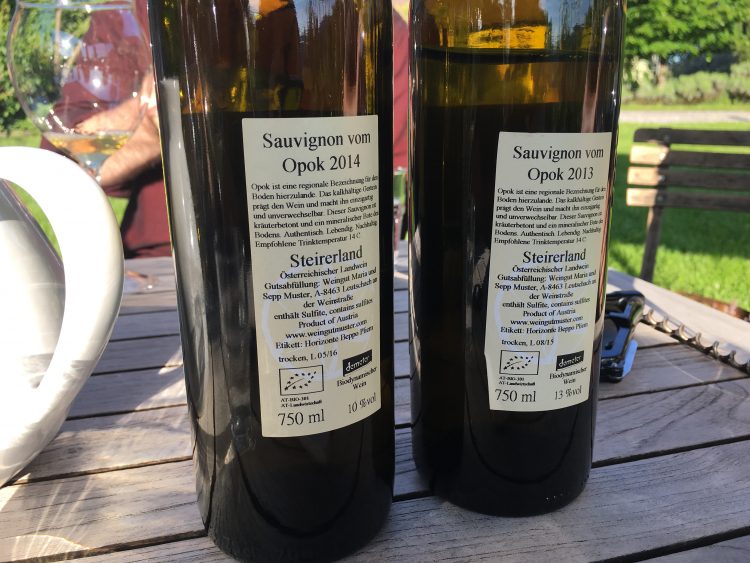 We tasted through a selection of the Muster wines, and just for fun, tasted some bottles which had been open some five days and were still showing exquisitely. Their cellar is both clean and rustic, with nothing too sterile, but nothing caked in mold either. 2011, 2012 and 2013 were all great vintages, but even in 2014 where they suffered through a rainy harvest, lost fruit, and didn’t make any red wine at all, the whites they recently bottled are some of Sepp’s favorite wines. He was able to use zero sulfur in this vintage, something they’ve been working toward for more than 15 years, but can’t always do. They’ve used less and less each year, but a zero sulfur addition is their goal. 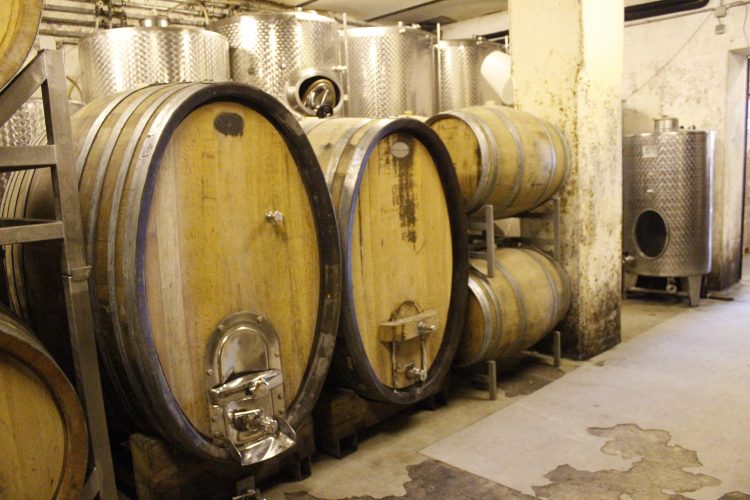 Sepp has experimented with acacia, but prefers to use a mix of Austrian and French Oak.

We sat around their table outside, late into the evening sky while Sepp and Maria gave me a lesson on biodynamics. Looking up at the full moon, Maria explained that you don’t prune or cut during this phase because there is more water in the stalks of the vine (as opposed to the roots) and the vines are more susceptible to disease. It loses something, a bit of their power and strength and is referred to as bleeding vines. There are other planets and constellations that can affect farming, but the phases of the moon are the most powerful.  There are also times to avoid bottling because the wine is more prone to show the oak influence. Regardless of what decision needs to be made, they always taste first and go with what feels right. Sepp says, “it’s important to do the right thing at the right time,” explaining that it’s less about how much or how little intervention is used in winemaking, and more about doing things at the correct time. 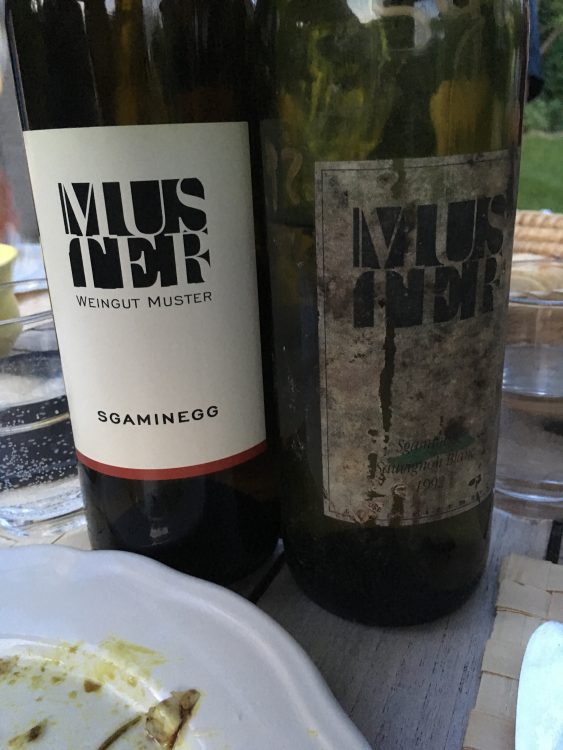 A special treat to taste the Sgaminegg from 2006 and 1992, a blend of Sauvignon and Morillon from the top of the vineyard (the stoniest part); this vineyard has the most influence from the Koralpe mountain range. We expect to see wines from the Sgaminegg vineyard in NY in the future!

Visiting Sepp & Maria was a one day immersion into Steiermark. They live as farmers do, with love and attention to every local detail. We ate a roast pork from a local pig, snacked on local sheep’s milk cheese, discovered Styrian pumpkin seed oil (a local staple that is now my obsession), blended with homemade vinegar and served over castelfranco radicchio from their garden. Their one-eyed cat leapt into my lap, hoping for a scrap. Their youngest daughter climbed the tree behind our table, where she quietly watched the scene, camouflaged in her green shirt. 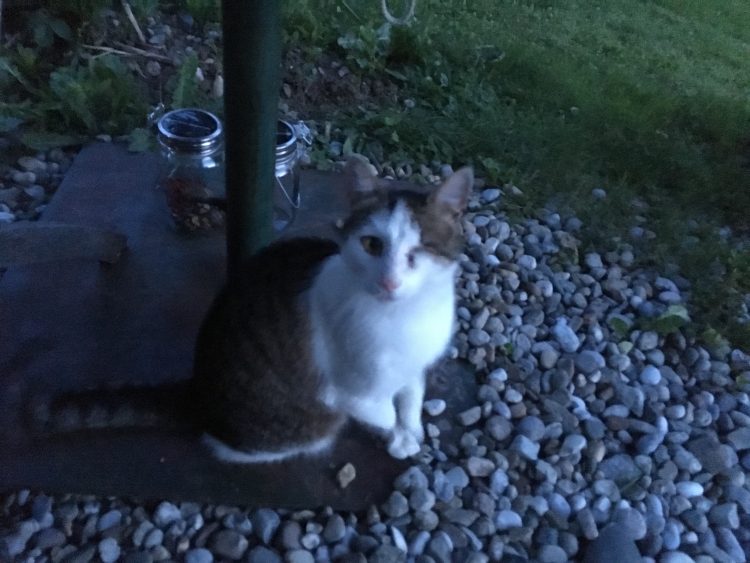 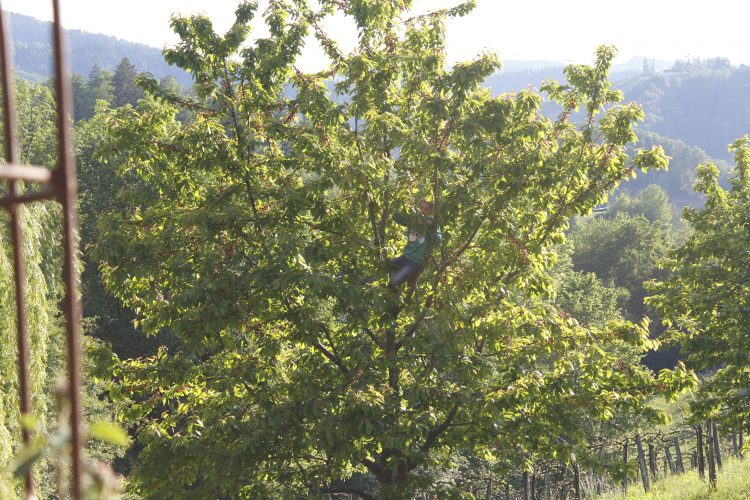 The wine flowed into handblown wine glasses made by a local artist friend. No two wine glasses were the same, and this mirrored one of the elements I love most about natural wine: not only that the wine changes each year to reflect the vintage, but also that each wine is constantly evolving and alive. 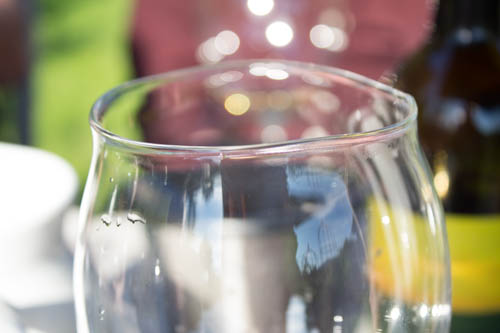 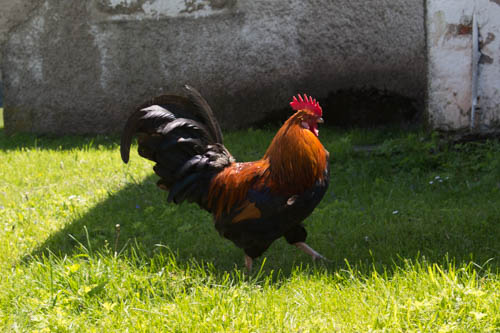 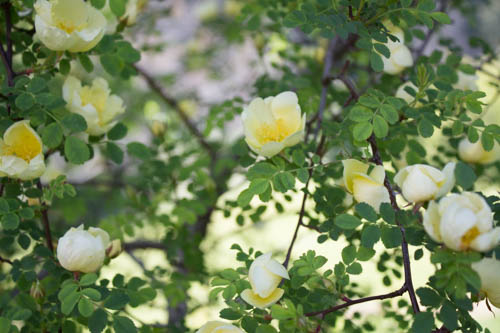 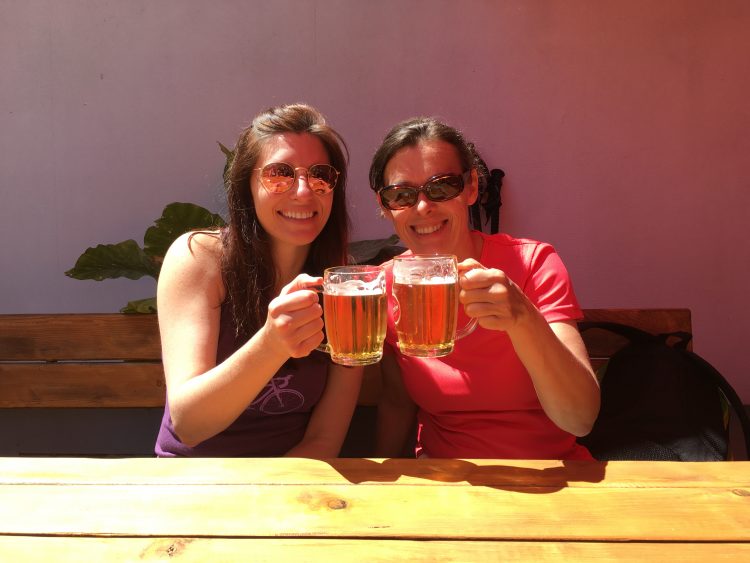 All photos by Lauren Kennedy