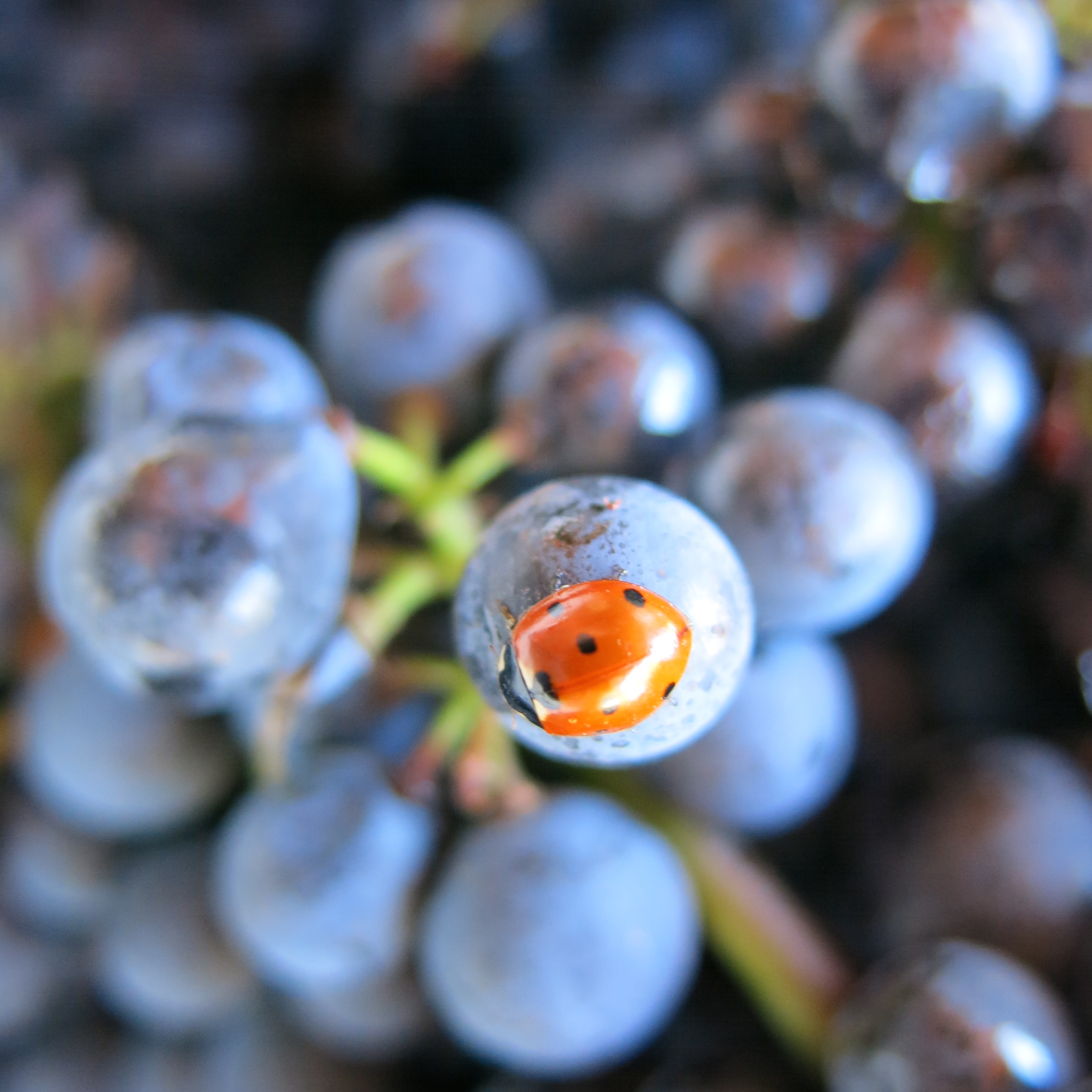 There are moments of working in the NYC wine industry when we can feel disconnected from the wine we are working with. There is something about rolling a wine bag into the subway and down the crowded streets of the city that feels (and is) so very far away from where it began. This is why it’s so important and refreshing to spend time on the vineyard – to feel the soil, breathe the clean air, get your hands (and feet) dirty and re-connect with the earth. This is, after all, where all the important things begin. 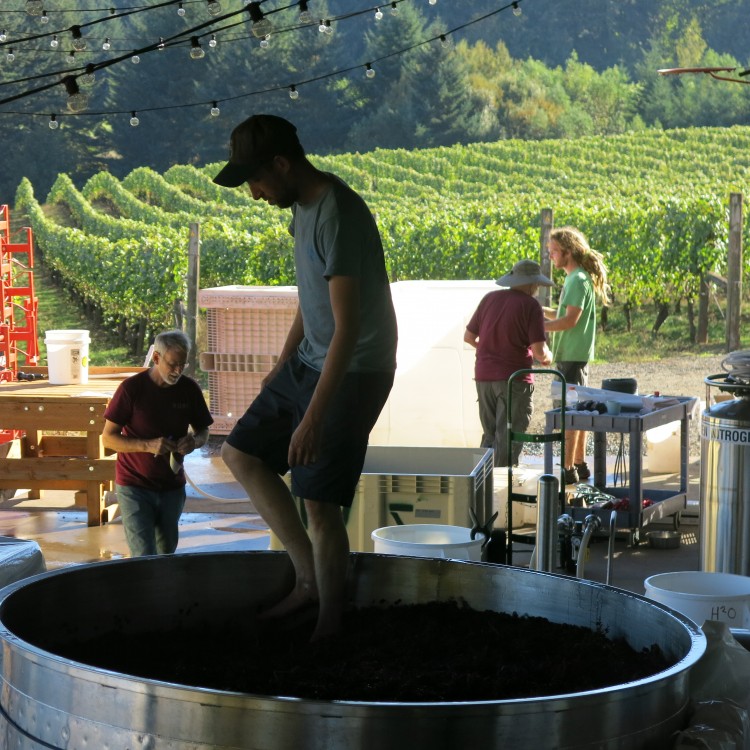 I had the pleasure of spending a few days with Joe Pedicini and his team outside of Hillsboro, Oregon in the Willamette Valley and experiencing the magic of harvest. Long hard work days are followed by long nights of talking and laughing over homemade food and wine and the reward is spending a lot of time with talented, amazing people and the ability to actually taste what they’ve created. 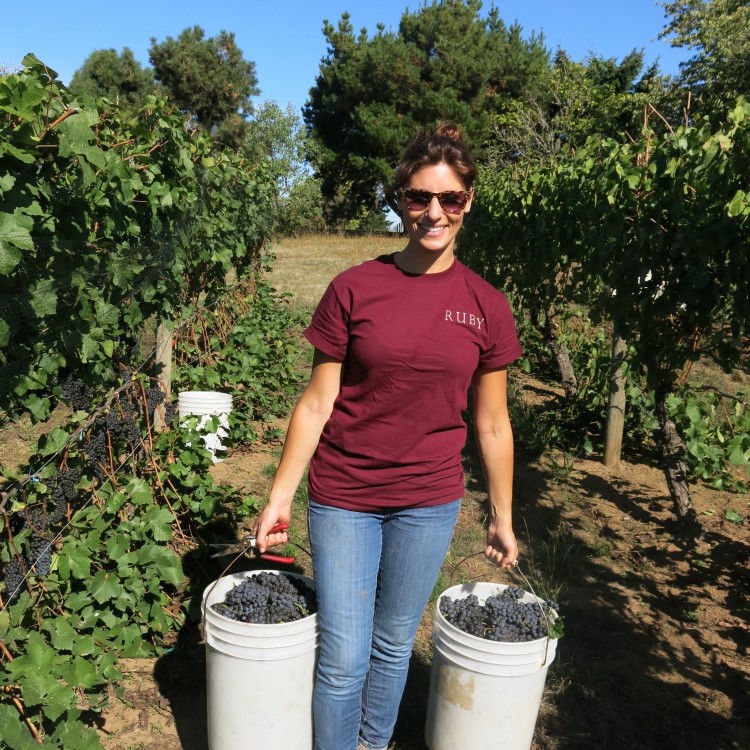 Getting my hands dirty!

The weekend started on an uncharacteristically warm and sunny October weekend at Ruby Vineyard where Joe has been making his wine for 2 years now. Steve and Flora are a husband and wife team who own the house and vineyard where neighbors pop by for a coffee or to put in a few hours of work and even just to say hi to the crew and pet Stanley, the vineyard dog. Two interns and a handful of other harvest helpers make the winery buzz with excitement and a family vibe where it doesn’t feel quite like “work.” The backdrop is sprinkled with green hills and mountains with Mt. Hood standing proudly in the distance, wearing a pink hat at sunset and everyone stops to stare. 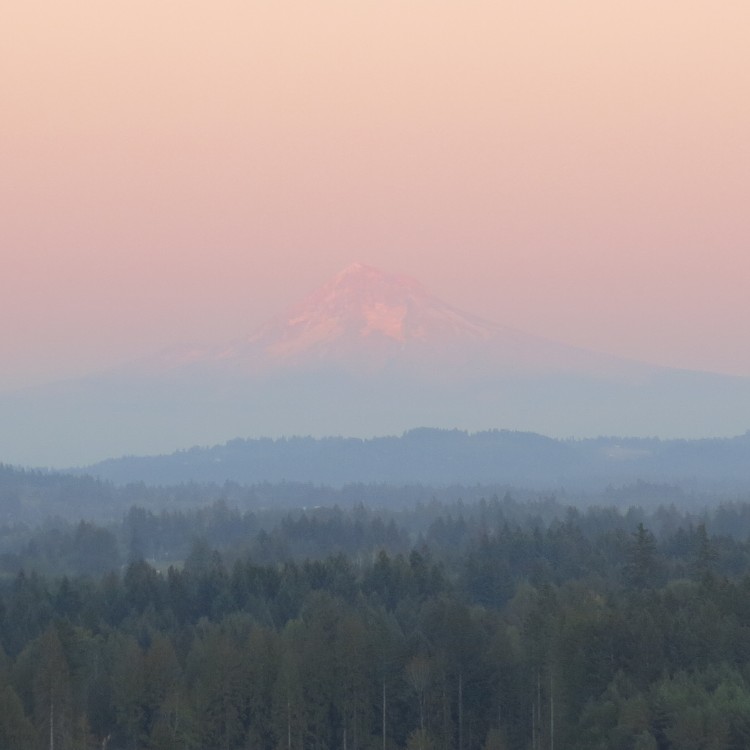 We processed 20 tons of fruit while I was there and 2014 was a perfect growing season. The fruit tumbled onto the sorting table in near perfection, only a few leaves here and there to pick out, all of us snacking on bunches throughout the day. I decided to pick Joe’s brain about the other vintages and vineyards he works with. 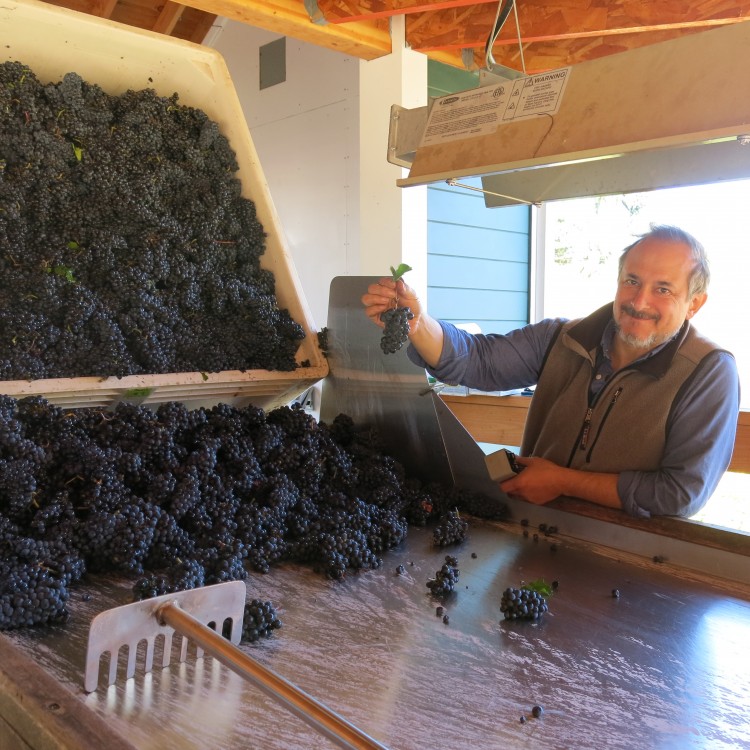 The 2011 Crawford Beck just arrived in NY at the beginning of October. 2011 was a cool, rainy year – harvest was a nearly a month later than in 2014. Every vintner has a different way of deciding when to pick; Joe uses both testing and taste – and in 2011 when the brix were measuring but the flavors were not developed enough for his palate he waited a bit longer. A small and perfect window for picking finally arrived and though it was a bit hectic, the fruit came in beautifully and worth the wait. Crawford Beck vineyard is owned by David and Jeanne Beck and according to Joe is meticulously farmed. Always using at least 50% whole cluster fermentation, he likes what the stems bring to the wine, herbaceous aromatics, and silky tannins when the wine is aged and ready. The cool year brings great acidity and balance, and in the end a wine that is more delicate and floral than in warmer years. 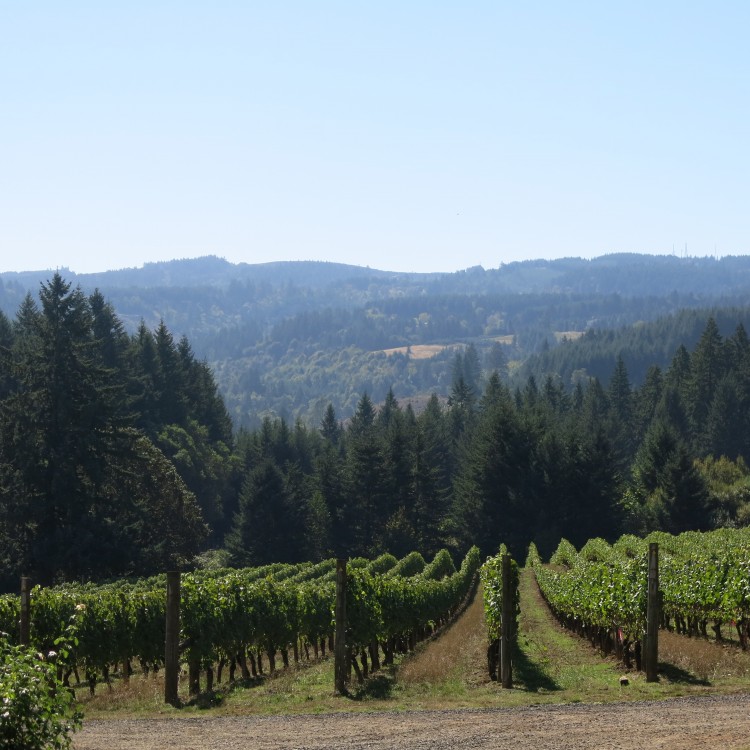 The most interesting thing about the Crawford Beck Vineyard is the two soil compositions living right next to each other. The Dijon 115 clone is grown on a slope where the top slope is volcanic soil and the bottom is marine sediment. Though the fruit is grown just steps from one another they make completely different wines – terroir!  Joe has always vinified the two wines separately and later blended them to make the Crawford Beck Pinot Noir we know and love in NY.  But recently, he started making two separate wines to showcase how these soils produce very different wines from the same vintage. In the future he will make three wines from Crawford Beck, with grapes grown in the different soils alone, and one as a blend. We can’t wait to taste them! 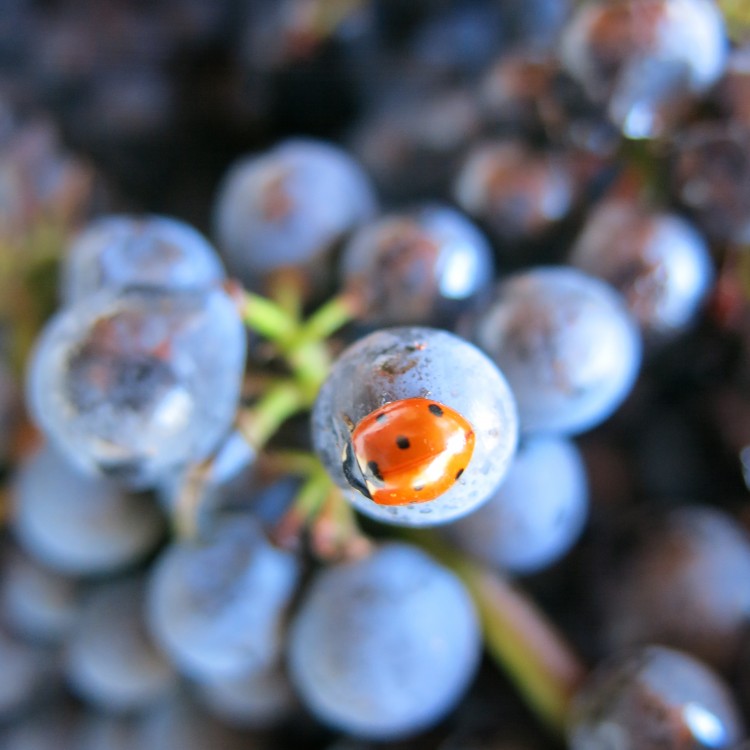 Joe started working with a couple of new vineyards in 2012 – Kathken vineyards and Momtazi, a biodynamic vineyard. Kathken Vineyard, from which the 2012 Pinot Noir also just arrived in NY, is a high elevation vineyard with Jory and Nokia soils.  In 2012 the conditions were perfect — almost too hot in some areas but with the high elevation at Kathken, a cooler AVA from the nearby Pacific influence, the ungrafted old clones of Wädenswil and Pommard fared perfectly.

While Joe has a method for his winemaking it’s refreshing to see that he’s not afraid of the unknown – throughout the weekend he pulled some fruit aside for various experiments just for the sake of trying new things and learning by doing each year. While processing some perfect Gewürztraminer fruit we decided to hand squeeze a bunch into steel pots to skin ferment and later bury underground for a few months. 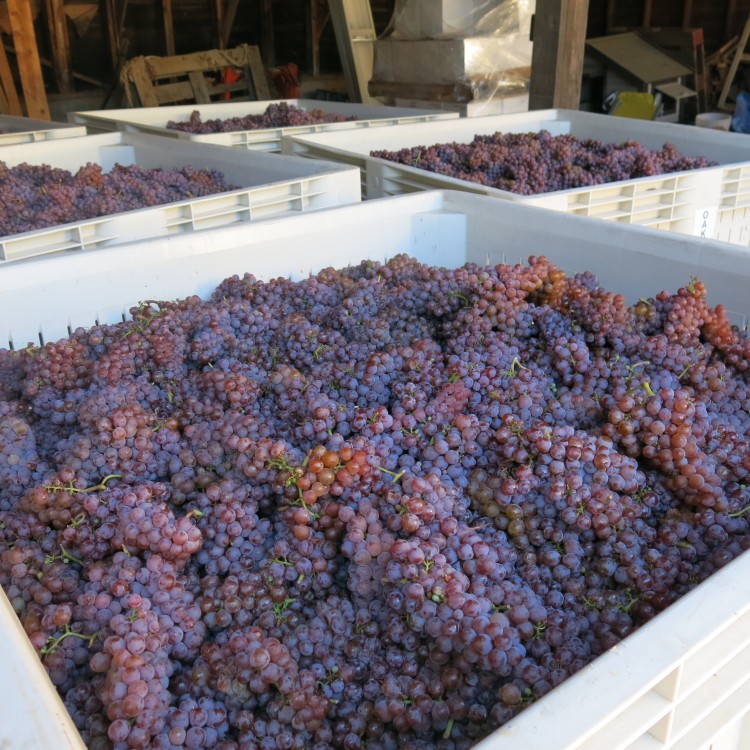 So what about the wine? It starts in the vineyard but it ends in the glass! The wines of Montebruno are reflective of the precise work that begins in the vineyard. In the glass they are expressive, thirst-quenching, and full of life. Wine that is delicate yet complex and interesting. Pinot Noir that embodies the terroir from which it came yet somehow echoes the style of Burgundy. 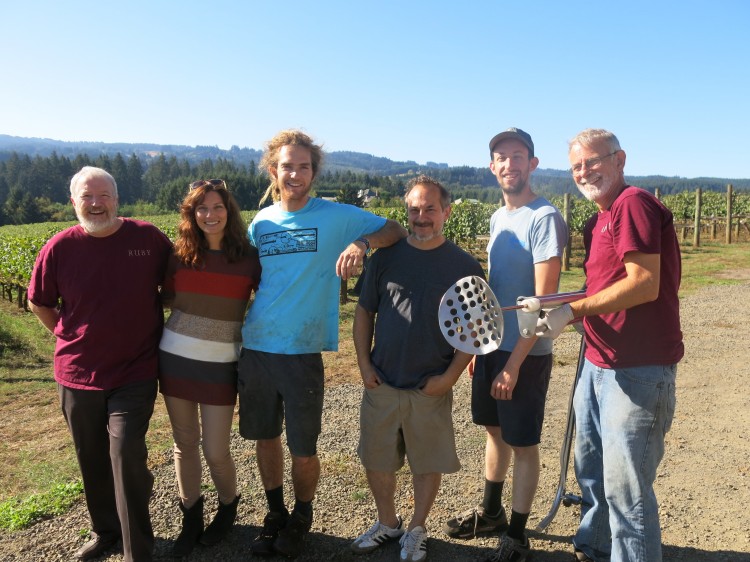