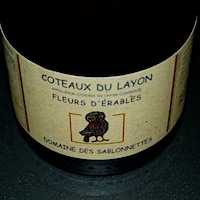 Christine and Joel Menard of Domaine des Sablonnettes have been making beautiful and affordable natural wines in Anjou for over 20 years now. Their simple yet elegant fruitiness and affordability have become many people’s introduction to natural wines. For more on their philosophy, check out this video interview we shot with them in 2011. Few people know that they actually got their start making sweet wines in the Coteaux de Layon appellation. We’re pleased to offer these wines today, by DI only.

All of Christine and Joel’s Coteaux du Layon are harvested in several carefully selective passes through the vineyards (tries) in order to produce ideally ripe cuvees with the help of botrytis alone (and never chaptalization). The harvest generally extends from mid October through the end of November. Indigenous yeasts help guarantee an authentic expression of the grape, the vintage and terroir.

Here’s some background on these cuvées:

For pricing information, please contact your sales rep today if you’re interested in ordering some of these wines!