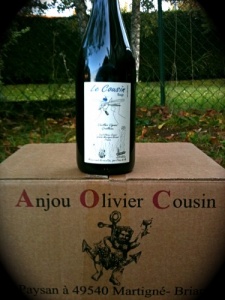 There is a ton of chatter going on right on the internet about Olivier’s fight against Inter Loire and the AOC. Here’s a roundup of the various articles out there:

Mike Steinberger, the former Slate wine columnist has a post up on his blog entitled, French Wine Bureaucrats: Stop the Madness! Even Michel Bettane (the man some call the Robert Parker of France) has chimed in on the comments.

Bert Celce has a piece up on wine terroirs discussing the scandal. Featuring some great pics of Jenny, Francois, and Olivier!

Food and Wine magazine is making the struggle mainstream in their “mouthing off” column. Bonus props for the inflammatory title, “AOC wants winemaker in jail.”

The Decanter article that really kicked off the coverage on Monday, “Loire Producer Faces Jail for Protest Labels.”

Alice Feiring’s article on October 1st brought attention to the issue first. This one features a letter in French from Olivier Cousin that we have translated here as well.

Jim’s Loire blog offers an interesting comparison between the penalties Olivier and 1855, a large online French wine retailer are facing.

Adam Morgenstern, of Organic Wine Journal fame, has a nice column in the Huffington post, “Winemaker Faces Jail for Being Organic.”

Even Jancis Robinson, famed British wine critic has chimed in with an article, “French Silliness over AOC.”

If you take the time to read all the articles here, you begin to see a common theme among them. They all point out the crisis of the AOC system and call for some serious reform. Inter Loire is supposed to be a public relations arm of this system, that exists to promote Loire Valley appellations. It would appear their strategy is backfiring on them, as the internet erupts with bad publicity about the AOC system.

Let’s keep the pressure up on Inter Loire! If you know anyone who works at Inter Loire or within INAO (the government side of the AOC system, headed by the Minister of Agriculture), let us know your suggestions for making this international movement heard within France. If you haven’t done so, please sign our petition here. We’re approaching 300 signatures in a little under 24 hours, which is great, but Olivier needs all the help he can get!